Upper West Seattle Bridge will be closed for an unknown amount of time, biking across the swing bridge still open 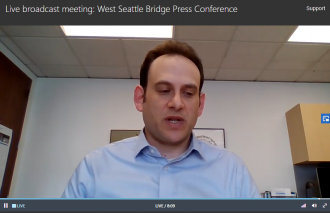 SDOT Director Sam Zimbabwe made an unexpected announcement Monday afternoon that the upper West Seattle Bridge will be closed starting at 7 p.m. due to concerns about cracking in the bridge structure.

The lower swing bridge and its walking and biking path will remain operational, but the traffic lanes will be reserved for transit, freight and emergency access.

The upper bridge is the busiest bridge under Seattle’s control, carrying nearly 100,000 vehicles and the bulk of West Seattle buses on a typical day. Of course, these are not typical days, and Zimbabwe said traffic has dropped by about half due to the COVID-19 outbreak.

They did not give any cost or timeline estimates during the press conference because they are still assessing the problem. But it’s likely to be a lengthy closure (they seemed to be measuring it in weeks) and a costly fix.

This all means that biking is now the best way to get to and from West Seattle, and there are likely to be a lot more people trying to do so. This is what happened during the Viaduct closure in early 2019, and even with the outbreak there are still people who need to get around. If you live in West Seattle, now is the time to share resources with your neighbors about how to get around by bike. It sucks that the outbreak makes group rides a poor option, but letting folks near you know all the tips and tricks (best side streets, etc) you’ve learned would be a big help I’m sure.

Here’s an excerpt from the official Seattle Bike Map:

Out of an abundance of caution, the Seattle Department of Transportation (SDOT) announced today that it will close the West Seattle High-Rise Bridge effective 7:00 PM tonight (March 23, 2020) to all traffic due to accelerated concrete cracking that was observed during a regular bridge inspection. A comprehensive assessment has already begun with a team of experts to determine the extent of the cracking and put together a plan for a near-term repair. The bridge closure will begin at 7 PM tonight will remain closed until further notice.

Buses, freight and emergency vehicles will be moved to Spokane Street Bridge, which is also called the “low bridge,” and motorists should use the First Ave or South Park bridges.

“Even in the midst of a pandemic, the Seattle Department of Transportation has been closely monitoring our critical infrastructure. Last night, our engineers identified safety risks in our West Seattle high rise bridge and are now taking swift action to protect the public by removing traffic from the bridge while next steps are assessed,” said Mayor Jenny Durkan. “Transit, freight and first responders will continue to have access to the Spokane Street bridge to ensure access to and from West Seattle. To the residents and businesses of West Seattle: I want to thank everyone for their flexibility and patience during this challenging time in Seattle’s history. It is a top priority to ensure safety and access to goods and transit, and we will be working as quickly as we can resolve this.”

“We’ve kept a watchful eye on the West Seattle Bridge for years. Recently, a series of closely monitored cracks have grown faster than our team of experts had anticipated. Our engineers saw this acceleration as a clear warning sign that closer inspection is necessary, and complete closure is required to maintain safety as our top priority. As we close the bridge today, we will scale and accelerate a process already underway to determine next steps. Above all else, as the Mayor has made clear, we will make sure our first responders have quick and safe access to and from West Seattle,” SDOT Director Sam Zimbabwe said.

“As a West Seattle resident and a citywide public official representing all Seattleites, I believe this is the right decision for the safety of West Seattle bridge users, and the long range transportation demands of my constituents,” said Council President M. Lorena Gonzalez (Pos. 9 – Citywide).  “I stand ready to work with Mayor Durkan, Director Zimbabwe, Councilmember Herbold and Chair Pedersen, to address the short-term and long-term impact of this bridge closure.  Keeping people safe is critically important and this closure prioritized the health and safety of the over 100,000 people who use the West Seattle Bridge every day.”

“I support the Mayor’s decision to temporarily close the West Seattle Bridge because safety should be our top priority,” said Councilmember Alex Pedersen who chairs the City Council’s Transportation Committee.  “As we provide safe travel alternatives for residents and public transit, I look forward to hearing not only an analysis from structural engineers but also next steps, including a realistic timeline for solutions from our Seattle Department of Transportation (SDOT).”

At 7PM, all public and private vehicles will be prohibited from crossing the high-rise span of the bridge between I-5 and Fauntleroy Way SW. SDOT is putting signs in place to guide people through the new route. Prohibiting people and vehicles from the structure reduces the load weight and is necessary for public safety.

While the problems have accelerated at a rapid and unanticipated rate, this challenge did not appear out of the blue. The West Settle Bridge was originally designed for three lanes of travel in each direction. As Seattle grew, the bridge grew to three westbound lanes and four eastbound. This added traffic, combined with the significant increase in size and weight of commercial vehicles (including buses), has only compounded the long-term maintenance challenges posed by the West Seattle Bridge. Further, 80 percent of the bridge load is dead load, meaning deterioration is possible even when all traffic is removed.

In 2019, however, the Federal load rating for this type of bridge changed and the Seattle Department of Transportation assembled a team of engineers and experts from the public and private sectors to begin actively assessing the extent and growth of bridge cracking, create safety recommendations, and a short-term repair plan.  As a component of that review, SDOT has been regularly inspecting concrete cracks in the West Seattle Bridge. During the latest inspection, an SDOT engineer found known cracks in the concrete had worsened at a rate SDOT and the outside specialists found unacceptable.

The City is working with King County Metro and regional transportation, life-safety, and maritime partners today to jointly develop a comprehensive traffic control plan to keep people and goods moving. This plan will include bus reroutes, general traffic detours to alternative streets and bridges, and a street-by-street approach to increase the capacity of detour routes to better carry the traffic using the high-rise bridge today.

The Seattle Police Department, Seattle Fire Department, and medical first responders are aware of the closure and planning detours. SDOT’s traffic control plan will use streets that accommodate the emergency response network to connect communities to hospitals as they are today.

King County Metro bus routes that typically travel the West Seattle Bridge include RapidRide C Line, 21 and 21X, 37, 50, 55, 56, 57, 116X, 118X, 119X, 120 and 125. Routes 37 and 125 are not operating during Metro’s temporary reduced schedule, which started March 23. Metro is working to finalize bus reroutes using the Spokane Street lower bridge and surface streets in SODO, and identify whether any bus stops might not be served as a result of the reroutes. Metro customer information staff plan to post service advisories online later Monday.

2 Responses to Upper West Seattle Bridge will be closed for an unknown amount of time, biking across the swing bridge still open