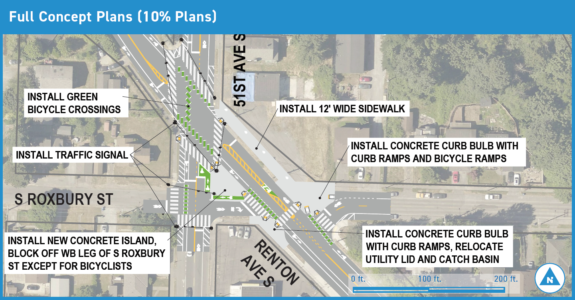 One of 15 projects moving forward through the Neighborhood Street Fund.

When voters approved the 2015 Move Seattle Levy, they created a specific fund dedicated to building projects that came from neighbors. The process to get a project completed can be long and somewhat grueling for those to volunteer their time to propose and support them, but it’s pretty cool that the city will invest significantly into ideas that come from outside the department itself.

SDOT recently released its list of 15 projects that the department plans to build through its Neighborhood Street Fund, including improvements spread out among every Council district. Individual projects can cost between $100,000 and $1 million. This is a totally different program from the city’s Your Voice Your Choice Parks & Street program, which is for smaller neighborhood-generated project ideas.

All of the projects are focused on safety, especially for people walking and biking. Many are intersection and crosswalk improvements, a few are new or improved sidewalks and a couple would redesign intersections to improve bike lane connections.

There’s the map of projects:

Founder and Editor of Seattle Bike Blog.
View all posts by Tom Fucoloro →
This entry was posted in news and tagged neighborhood street fund, sdot. Bookmark the permalink.