UPDATE: Be sure to read to the bottom of this post for an update from SDOT. This specific Neighborhood Street Fund project is dead, but the department has not abandoned this intersection, a spokesperson said. 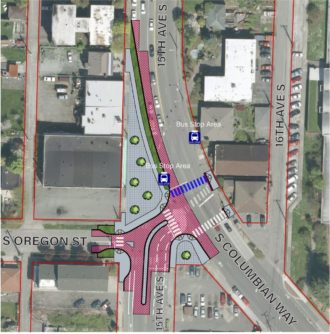 What could have been at 15th and Columbian Way S. Concept from the 2016 Neighborhood Street Fund selection announcement.

Yesterday’s post was supposed to be about a neighbor-led SDOT program focused on investing significantly into ideas generated from the community rather than from within SDOT. But then just when it went live, The Urbanist reported some very depressing news about a 2016 Neighborhood Street Fund safety project on Beacon Hill. SDOT has officially cancelled the long-delayed intersection redesign and public plaza at 15th and Columbian Way S for purely political reasons.

So an intersection near a middle school will remain dangerous because people who didn’t want it to change got organized, and city leaders buckled.

“After extensive design and coordination with the community, we were unable to reach a consensus on a design that could be supported by the community as a neighborhood proposed NSF project,” SDOT Spokesperson Ethan Bergerson told the Urbanist.

Consensus? If we suddenly need neighborhood consensus to make changes to our city, then we will never change anything ever again. This is an absurd and dangerous requirement, and it cannot become the new standard for NSF projects. The process is already grueling for the volunteers who propose ideas, and the result is an idea that is generated from community members and design by SDOT’s professional engineers. There will always be people who don’t want change. Always and forever. True leadership means doing the right thing, anyway. Trading away safety for middle schoolers because some adults wanted it to be a little bit easier to drive and park cars is very poor leadership.

This project was not cancelled because of further study. There was no professional report that found it would be unsafe or cause problems for neighbors or businesses. It was rejected because some neighbors just didn’t like it.

This intersection is dangerous today, and it will be dangerous tomorrow and every day until we do something to make it safer. As the Urbanist’s Ryan Packer reported:

The school zone speed camera at southbound 15th Avenue S adjacent to the Middle School records an astronomical number of tickets issued: during the 2018-2019 school year, there were an astounding 8,012 tickets issued to drivers exceeding the 20mph speed limit, over 800 per month. The cameras only capture speeding at certain times of day immediately before and after school hours. This makes the southbound 15th Avenue S camera the busiest school zone camera in Seattle…

And is it mere coincidence that this intersection is just blocks away from Columbian Way/Beacon Ave where SDOT quietly deleted a half block of planned bike lane to create a turn lane instead? (UPDATE: See below for good news about this intersection) Why is safety for people walking and biking in South Beacon Hill such a low priority for our city?

Seattle will have a chance to make this right in a couple years when 15th Ave S is scheduled for repaving in 2022. We must accept nothing less than the level of safety represented in the 2016 project.

UPDATE: SDOT’s Bergerson got in touch to clarify that the intersection has not been abandoned, though the specific NSF project will not go forward through that funding source. Instead, they are now looking to the upcoming 15th Ave S paving project as an opportunity to pursue a new design. So it may not look exactly like the 2016 NSF project, but they are “committed to making pedestrian and bike safety enhancements at this intersection.”

Also, Bergerson had some really great news. SDOT will be fixing the Columbian Way/Beacon Ave intersection and completing the bike lane there (see in bold below). And this should happen as soon as this next week.

From Bergerson via email:

We are still committed to making pedestrian and bike safety enhancements at this intersection, which are expected to be incorporated into upcoming paving work. We are planning community outreach in early 2020 to re-engage nearby neighbors and businesses at and nearby this intersection. Specifically, we aim to address the comments and concerns we received in 2018 and take advantage of paving planned for 2021 to install enhancements and formalize what is currently paint and posts.

We have also prioritized two safety enhancements in this area on a faster timeline:

We cannot use Neighborhood Street Fund (NSF) dollars because the NSF program is specifically designated for community initiated and supported projects. We needed to redesign this project from the original proposal for a variety of reasons including pedestrian safety, and after extensive community engagement we were unable to reach a solution that was supported by many in the community, including the original NSF program applicants.