The dark side of bait bikes 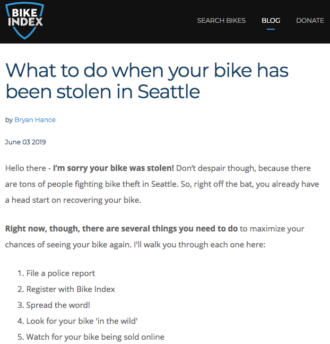 BikeIndex is a great resource for people to report a stolen bike.

Bike theft is a serious issue. Not only do victims lose the value of their bikes — measured both by money and sentimental value — but they also lose their mobility. A bike isn’t a car stereo or Amazon package, it’s a mode of transportation. And if you can’t easily afford a replacement, a stolen bike can be devastating. And even for people who can afford a replacement, the hassle required to go bike shopping is sometimes enough that people don’t bother. And that’s not a good outcome either.

It’s also very difficult to catch bike thieves, especially since the item they just stole happens to be a great way to get away. So it makes some sense that departments would want to find ways to deter bike theft by making bike theft seem more risky. What if some percentage of bikes were tracked by police, and it was impossible to tell which ones they were? Would that make potential thieves think twice about stealing one? That’s the basic idea behind “bait bikes.”

However, there’s a point where theft deterrence becomes victimization of poor people, and Denny Westneat at the Seattle Times recently wrote about a troubling case in which the jury sided with the accused:

Back in the summer of 2018, [Jolene] Paris was hanging around near a Goodwill outlet store, on Sixth Avenue South in Sodo. It’s a regular gathering spot for the homeless and the near-homeless, as it’s a liquidation center where they offer stuff in bulk that didn’t sell at a regular Goodwill. (“Shoes — $1.19 per pound. All sales final.”)

Paris noticed a silver road bicycle, an old Sirrus Pro model, leaning against a tree in the dirt near some shrubs. According to her testimony, she thought it odd someone had left a bike there, unlocked and unattended, in this high-crime neighborhood. So she started wheeling it around the Goodwill parking lot, asking if it belonged to anyone.

It did belong to someone – the Seattle Police Department.

The police basically argued that it wasn’t her bike, but she took it. Therefore she should be guilty of theft (it was a misdemeanor charge because the bike was valued below the threshold for a felony). But context is everything, and the bike in the dirt near a Goodwill (where people get rid of things they don’t want) and was not locked. So how serious really was the crime they caught here? Was there room for someone to reasonably believe the bike had been abandoned? The jury thought so.

“This was a sting operation that targeted homeless people,” defense attorney Brandon Davis argued in a pretrial brief according to Westneat. “It is one of the poorest areas in the city. SPD placed this bicycle near a Goodwill, a store that serves people with low incomes, and left the bike unlocked.”

SPD says bait bike operations have only happened in the South Precinct and have resulted in 12 arrests and charges since August 2018.

“Bait bike operations will continue to both deter bike thieves as well as arrest those who profit from this crime,” the Department wrote in a statement.

If officers had locked the bike, even with an easily-defeated cable lock, we’d be having a different conversation. A locked bike in public is clearly someone’s property, and they would like it to stay where it is. Cutting a cable lock requires the thief to have cutters or a saw, which would suggest they were out with the intention of stealing a bike. An unlocked bike just introduces so much gray area.

If putting a lock on a bait bike makes such a sting too difficult (since it would likely take longer for the bike to be stolen), then SPD should rethink its methods.

In my time writing Seattle Bike Blog I’ve had a lot of people reach out to say their bikes have been stolen, and I’ve started to notice patterns. This is anecdotal in that I don’t have hard data to cite, but the largest category of thefts seems to happen at home. Someone broke into a garage or backyard probably looking to burgle whatever was convenient, and the bike was easy pickings (tip: lock your bike even inside your own garage). “Secure” bike parking areas of apartment buildings are also common targets. When bikes are stolen from a public bike rack, cable locks are the easiest targets because the tools required to cut them are much simpler and smaller (tip: no lock is guaranteed to prevent theft, but you should really upgrade your cable lock to a u-lock, folding bar lock or heavy chain lock).

Of course thefts happen to unlocked bikes in public, too. People run into a coffee shop for “just a minute,” for example, and someone passing by notices the opportunity and rides off with the bike. To me, that is clearly different than finding a bike behind a Goodwill, but you can see how lines start to get blurry.

My biggest priority for police action related to bike theft would be to help victims recover their bikes, especially when the victim has located it for sale online or spotted it in person. Too many times, people have done the sleuthing themselves and found their bikes listed online, but police have failed to help them get it back. And at least in those cases enforcement also produces a good outcome for a theft victim.

6 Responses to The dark side of bait bikes