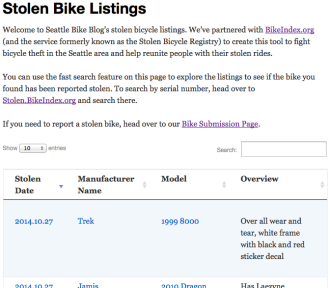 I am excited to announce a new feature on Seattle Bike Blog designed to battle bike theft and help reconnect people with their stolen rides.

We have partnered with BikeIndex.org to create a listing of stolen bikes in the Seattle area and an easy form to add your bike to the Stolen.BikeIndex.org database, which can be searched by people anywhere in the world.

Bikes submitted will also be automatically tweeted by the @StolenBikesSEA account to help spread the word via social media.

This summer, BikeIndex combined with the stolen bike database formerly known as the Stolen Bicycle Registry. Bryan Hance, the founder of SBR, is a tireless bike theft fighter who has helped reconnect a lot of people with their bikes and helps to report thefts and suspicious sellers to authorities.

Hance is now working with BikeIndex to developing tools to help make the stolen bike listings more useful to more people. He designed a web app to work with Seattle Bike Blog and other local bike blogs to make it easier to battle the problem of bike theft that plagues communities everywhere. We are very excited for this service to go live today.

It is hard to say whether bike thefts are happening more often than in the past, but it certainly remains a serious problem and a big impediment to cycling as a mode of transportation. Casey Jaywork recently wrote an excellent piece about bike theft in Seattle for Seattle Met, and KIRO’s David Ham reported this week on a GPS-tracked bait bike program Olympia police are using to catch thieves in action.

Submitting bikes to the database is just one tool to fight bike theft. You should also report all bike thefts to the police. This is not only helpful if you want to get your bike back, but it also helps create a more complete picture of bike theft in the city. In Seattle, you should call the SPD non-emergency number and file a report with an officer: (206) 625-5011 (if the thief is still in the area, call 911). If your bike has a monetary value less than $500, you can file an SPD report online.

SPD also tweets bikes they collect through evidence or that have been reported as abandoned through their Twitter account @GetYourBikeBack. As with stolen cars, bike thieves sometimes just take a bike for a joyride and then ditch it in a bush or someone’s front yard. But without a report, the bikes just languish in a police warehouse.

Of course, the best thing you can do to prevent bike theft is to get a strong lock. If you only have a cable lock — even if it looks strong and has a strong-sounding name — get a u-lock, heavy chain or comparable lock. Cable locks are a good way to secure your wheels to your frame, but a stronger lock is needed to hold the frame to the bike rack. Cable locks are simply too easy a target for thieves, who can cut them quickly using small handheld tools.

You can access the stolen bike listings any time by clicking “Stolen Bikes” on the navigation bar under the Seattle Bike Blog logo above.

Founder and Editor of Seattle Bike Blog.
View all posts by Tom Fucoloro →
This entry was posted in news and tagged bike thefts, bikeindex, bryan hance, stolenbicycleregistry.com. Bookmark the permalink.