SPD launches stolen bike recovery project: ‘Get Your Bike Back’ 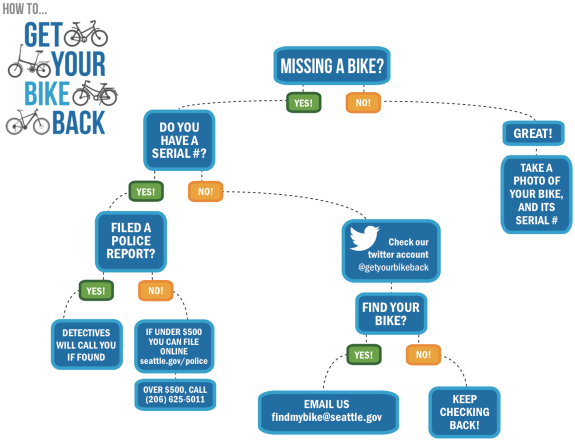 As with cars, some bike thefts are really just people taking a joyride. The thief rides the bike a little, then ditches it. Residents or workers call police to report an unknown bike in in their front yard or wherever, and the found bikes are taken into police custody. But then what?

Well, that depends in part on on you. No matter what, you should file a police report once you notice your bike is missing. For bikes under $500 in value, you can easily report the theft online. Over $500, call the non-emergency number at 206-625-5011 to report it to an officer.

If you have record of your bike’s serial number, your police report can help officers track a found or recovered bike back to you. So right now, go make sure you have your bike’s serial number recorded somewhere (I emailed the number and a photo to myself). This University of Texas guide shows you most the places the number could be located. If your bike was stolen and you did not record the serial number, you might be able to call the bike shop where you bought it and see if they can look it up in their computer.

However, if you have no record of the number, SPD has started tweeting descriptions of recovered bikes via the @GetYourBikeBack account. So check it out and see if your bike pops up there.

UPDATE: I also highly recommend listing all stolen bikes on StolenBicycleRegistry.com. Many shops and buyers do run bike serial numbers to see if the bikes were reported stolen. If you are a buyer or shop who does not do this, it’s a wonderful service to start.

There is still something of a black hole in the bike recovery process where your stolen bike is quickly spotted on Craigslist. Pleas to SPD to help set up a sting to recover the bike and catch the thief (or at least the person fencing the bike) are sometimes fruitless. Stories of people being forced to either let their bike go or to take the law into their own hands are not uncommon. I once took some very stupid risks to get a friend’s bike back (though we did get it). No bike is worth risking your health, but I know it’s very tempting to take action when you have a lead on recovering your wheels.

There’s also a chance that your stolen bike is being held as evidence in an ongoing trial or investigation. This process can take a long time, but it will eventually make its way to GetYourBikeBack.

More details on @GetYourBikeBack, from SPD:

Are you missing your bike? Then check out our newest Twitter feed, @Getyourbikeback.

Right now, SPD has about 500 “found” bikes in storage at our Evidence Warehouse. Each one of those bikes was abandoned somewhere in the city, then later recovered by officers. We may have your bike, and we’d like to reunite you with your wheels.

It’s a good bet that a number of the bikes in our warehouse were previously stolen, but owners don’t always call police to make a report. Why, you ask?

“People think that if they don’t have their bike’s serial number, they can’t make a stolen bicycle report,” says Found Property Detective Michael Whidbey. “You don’t absolutely need a serial number to get your bike back, but it does expedite the process.”

Don’t have your serial number? Then how about a sales receipt for the bike?  Or a picture of your bicycle (better yet, of you riding the bike)? Can you provide a vivid description of the bike, including details about special toe clips, stickers, scratches, dents or any other unique traits your bike might have?  We’ll need a bit more info than “I think that’s my missing a stock black Specialize Rock Hopper.”

Starting today, we’ll be tweeting general descriptions about the most recently “found” bikes and we’ll provide updates as more bikes come in.

So, what do you do if you see a bike you think belongs to you on @GetYourBikeBack?

The easiest way to get it back is to provide your case number (if you reported the bike stolen) and the bike’s serial number (if you have it), and send an email to [email protected], along with your contact information.

Then send an email to [email protected] referencing the tweeted bike description, and provide as many details as you can. Please don’t email to ask about bikes that AREN’T listed on @GetYourBikeBack.

@GetYourBikeBack is still a work-in-progress, and we’ll continue finding ways to make it easier for you to track down your missing bike. For now, we’ll be tweeting bikes as they come in.

If our Found Property detectives are not able to find a bike’s owner, the bikes still go to a good cause, and are often donated to several non-profits locally like the South Shore Middle School after School Bike Repair Program, Earthcore, Lions Club and Alffia, which provides bikes to women and children in Africa.

Bikes recovered during a criminal investigation still have to be held as evidence for trials—which often take years—but those bikes will eventually make their way to @GetYourBikeBack if we can’t find or identify the owner.

If you aren’t currently missing a bike, PLEASE take this opportunity to take a close-up picture of your bike’s serial number, along with a few additional pics of your bike for good measure.  Not sure where to find your serial number? You can find out right here.

Send the pics to your email account or save them somewhere you can easily retrieve them if needed.  If you want to be old-school about it, jot down your bike’s information on a piece of paper.  Be sure to save it in a safe, fireproof location.

We may not be able to reunite every victim of bike theft with their stolen bicycle, but we hope @GetYourBikeBack will help.

UPDATE: Here’s a video showing the incredible number of bikes in SPD evidence, via the SPD Blotter:

This entry was posted in news and tagged bike thefts, getyourbikeback, spd. Bookmark the permalink.

11 Responses to SPD launches stolen bike recovery project: ‘Get Your Bike Back’