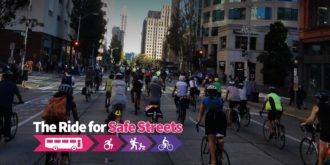 At a time when we need to make dramatic action to do whatever we can to reduce traffic injuries and deaths and combat climate change, her bike lane cuts are all backwards.

People already packed City Council chambers earlier this year to voice their concerns about the bike cuts. This Sunday, protest efforts go to the next level with a rally at City Hall followed by a slow ride/walk down 4th Ave (where a planned bike lane remains delayed) to Westlake Park for music. Meet at City Hall’s 4th Ave plaza at 1 p.m.

The Ride For Safe Streets has been organized with leadership from Brock Howell in partnership with a long list of organizations, including biking, walking, transit, climate and disability rights groups (see the full list here).

Many of the biggest barriers to making streets safer lately are coming from the Mayor’s Office, but there are also actions the City Council can take to make sure safety and climate policies and goals are followed. And it’s important to show city leaders how much enthusiastic support there is for bold safe streets action.

More details from the Ride For Safe Streets website (you can also invite your friends on FB): 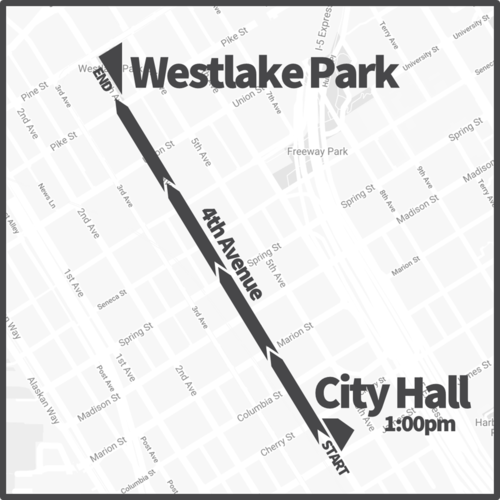 It’s time to act on climate change and make Seattle’s streets safe and accessible for everyone: people of all ages, languages, ethnicities, genders, races, and abilities.

Join us on Sunday, June 16 for this family-friendly (and father-friendly!) event calling on City leadership to act boldly on transportation. We’ll meet at Seattle City Hall at 1pm for a fun rally and then bike, walk and roll with hundreds of people down 4th Avenue to Westlake Park, where there will be actions to take as well as music, art, and other activities.

There will be a marching band, public officials, calls to action, and plenty of fun as we urge Seattle leaders to step up.

THE ROLL
1:55, The Roll begins, parade-like, with people riding, rolling, strolling, and walking.

We encourage groups to roll together with their own signs and art. Transit groups may create a giant cardboard bus and walk inside it. Climate groups may dress-up in polar bear suits. The “Big Wheel” bicycle lobby may ride high-wheelers. Your imagination and good sense are your only limits.

Everyone is encouraged to play music, whether it’s acoustic or from mobile speakers.

Everyone should obey traffic laws, and roll at a comfortable pace for people of all abilities around them.

Founder and Editor of Seattle Bike Blog.
View all posts by Tom Fucoloro →
This entry was posted in news and tagged ride for safe streets. Bookmark the permalink.

11 Responses to Sunday: Join the Ride For Safe Streets starting at City Hall