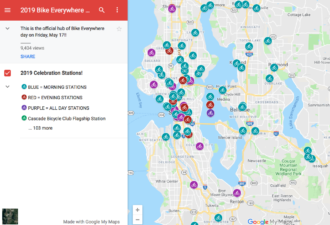 Bike Everywhere Day 2019 (formerly known as “Bike to Work Day”) is Friday, and there will be 113 celebration stations spread throughout the region to provide encouragement, smiles and maybe some coffee or donuts for folks biking to work or wherever.

Cascade Bicycle Club’s main station is at the south end of the Fremont Bridge near the Nickerson St Saloon from 7 to 9 a.m. There is no City Hall rally planned this year, as had become a tradition in recent years.

The stations are staffed by various groups and businesses all over the region as a fun way of celebrating a day when a lot of new or occasional bike riders give biking a try. Most stations are open from 7 to 9 in the morning, though there are a handful of all-day or afternoon stations, too. You can check out the official map via Google Maps.

Bike Everywhere Day is a wonderful glimpse into the near future, giving an idea of what the city would be like with a healthy boost in the number of people biking to get around. I definitely suggest starting your day early so you have time to hit up as many stations as you can.