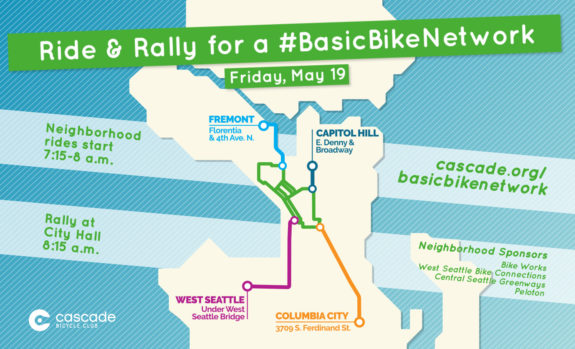 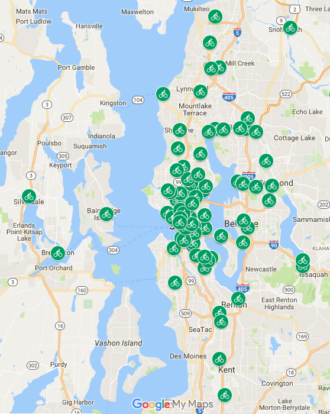 Cascade Bicycle Club is hosting four rides from different ends of town that will converge at City Hall Friday for a rally to support a Basic Bike Network to and through downtown.

The rides are part of the annual Bike Everywhere Day celebration (formerly known as “Bike to Work Day”). As always, there will be more than 100 “celebration stations” hosted by volunteers, community groups and businesses all over the region. Some have food, some have coffee, and some are just there to cheer you on as you bike to wherever it is you’re going early on a Friday morning.

Tomorrow is a great excuse to help your friend or co-worker bike to work for the first time. Most days, people aren’t standing around cheering you on just because you’re biking to work. And there will be a much bigger “safety in numbers” effect tomorrow as many new people give bike commuting a try.

That safety in numbers effect will be in full force for the four organized rides, especially the ride down Rainier Ave from Columbia City to City Hall. That’s right, Friday is your chance to ride the flattest and more direct route from Rainier Valley to downtown without fearing for your life in heavy, stressful traffic. Even if you don’t live in Rainier Valley, this ride might be worth waking up extra early to join. See you in Columbia City at 7:30 a.m.

And if you don’t work a downtown job, give yourself extra time to stop by a bunch of stations on your way in. You’ll also want to take time to appreciate all the new people out biking your route to work or school or wherever you go. Because Bike Everywhere Day is like a glimpse into the near future, when the number of people biking has grown just a little bit more.

Here’s the full map of stations:

What: Ride and Rally at City Hall this Bike Everywhere Day

Who: Anyone that rides bikes, wants to ride bikes, or cares about people who ride bikes! Plus, Councilmember Rob Johnson, Councilmember Sally Bagshaw, SDOT Director Scott Kubly and other transportation leaders. A special thanks to Councilmember Mike O’Brien’s office for hosting the City Hall Celebration Station!

Where: Meet at designated Celebration Stations to join a commute group or to rally from afar!*

Why: To demonstrate the demand for a downtown Basic Bike Network, plus safe connections to outer neighborhoods.