EDITOR’S NOTE: With Mayor Jenny Durkan delaying or cancelling so many bike route plans, Gordon Padelford and I had a conversation wondering how the movement for safe streets and better bike routes should evolve from here. Padelford, Executive Director of Seattle Neighborhood Greenways, then reached out with this open letter to people who bike in the Seattle area community.

Feeling this: "We come today to mourn the loss of the Bicycle Master Plan, Vision Zero, the Seattle Climate Action Plan, & the Complete Streets Ordinance—& we look to you @SeattleCouncil for guidance, and advising @MayorJenny, the Mayor's office, & @seattledot to bring them back! pic.twitter.com/Ou2JHdsxeG

Apu and Tamara’s symbolic shredding of the city’s climate and transportation plans represents what a lot of us have been feeling: What good are plans if the mayor turns around and ignores them when the going gets tough? We have all learned the hard way from the cancellation of long-planned bike lanes on 35th Ave NE and N 40th St that political pressure matters most in this mayor’s decision making — more than our city’s shared values and goals for health, safety, climate, fiscal responsibility, and accessibility.

So, what should the bike movement do in an era when raw politics matters most? By “the bike movement,” I mean the people and organizations who care about making our city a great place for everyone of all ages, abilities, walks of life, and backgrounds to cycle for their everyday needs.

Let’s build a bigger and better bike movement that is politically powerful enough to hold our elected leaders to Seattle’s values and goals, especially when there are loud voices trying to drag them back towards a 1950s vision for our streets. Let’s deepen and broaden our relationships and the base of people involved, and recognize that the “bike movement” is only one piece of a much larger effort — advocacy for housing, affordability, transit, disability rights, climate, community-building, walking, safety, police reform, public health, and more — to make a better city for everybody. And let’s redouble our efforts to out-organize and out-mobilize those who would oppose basic safety changes to our streets.

We should start by recognizing that the bike movement has already come a long way — even just since 2011 when Seattle Neighborhood Greenways got started. Back in 2007, a family biker who wanted protected bike lanes for her kids felt so unwelcome by the bike movement that she quit the Seattle Bicycle Advisory Board, but now, in a sign of the times, this board is led by two dynamite women who focus on equity and an inclusive movement. (EDITOR: This paragraph edited and a link added for clarity.)

Meanwhile, the leadership of Cascade Bicycle Club, at the time, laughed at people wanting to host slow rides for people new to cycling rather than athletic training rides, but now Cascade and others offer a variety of classes and rides for people who are just beginning to bike for everyday needs. The Seattle Department of Transportation (SDOT) was building a bike network of sharrows, mainly serving people who were comfortable riding in fast traffic; today, we have a Bicycle Master Plan that focuses on reaching the 60% of people who would like to bike more but don’t feel that it is comfortable, safe, and convenient yet. 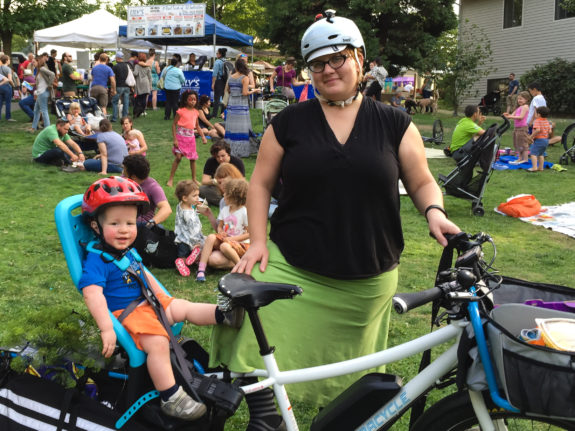 Tonya Ricks Sterr with her family bike and child.

The movement toward all-ages-and-abilities cycling was helped along by the formation of Totcycle, FamilyBike Seattle, and Kidical Mass, people-powered efforts that helped make Seattle a more welcoming space for parents and their kids to cycle.

As for our part, Seattle Neighborhood Greenways was founded to help the bicycle movement evolve, and did so by focusing on people and their everyday needs. We brought three critical ingredients to the movement: grassroots neighborhood organizing, pushing safety to the forefront of the conversation, and recognizing the importance of walking as well as biking in building a city that works better for everyone.

Deepening and broadening the movement

We are being held back by the perception that the only people who bike, and want to bike, present like me — young, white, male, cisgender, and wealthy. Ironically, the truth is that people of color are more likely to bike than white people, and people who have low incomes are much more likely to bike than rich people (see references at the end of this piece). And yet, the people showing up to advocate for safe streets don’t always reflect this. We can and should do more to lift up and amplify the voices of the young, old, families, women, people of color, queer, disabled, and low-income individuals. Toward this goal, Seattle Neighborhood Greenways has recently completed a Racial Equity Action Plan and Strategic Plan, with significant commitments about how we operate both internally and with collaborators. What underlies these and other commitments is what Seattle Neighborhood Greenways’ work has been about from the very beginning — caring deeply about people.

Here are our top recommendations (and SNG-wide commitments) for building a bigger tent:

Building a big tent is not just the right thing to do, it also builds our people power.

I want to tell you three stories of how Seattle Neighborhood Greenways’ neighborhood chapters are focusing on people power to win real improvements for their communities.

While we know that empirically (see further reading) bikes are good for businesses in terms of sales and talent recruitment and retention, when working with Seattle’s small business districts what matters most is listening and building relationships, as SNG’s local chapter Central Seattle Greenways (“CSG”) has shown. CSG teamed up with the Capitol Hill Community Council, Capitol Hill Housing’s EcoDistrict and Renters Initiative, and other community groups to do door-to-door outreach along the Pike/Pine corridor. Volunteers fanned out across the hill and talked with business owners and employees to listen and learn what their issues and ideas around traffic safety were. This was followed up by a community design workshop where 150 people talked with their fellow neighbors about what they needed out of a redesigned Pike/Pine. Thanks to their efforts, the temporary Pike/Pine protected bike lanes installed later this year will better meet the needs of neighboring businesses while providing safety for people biking.. 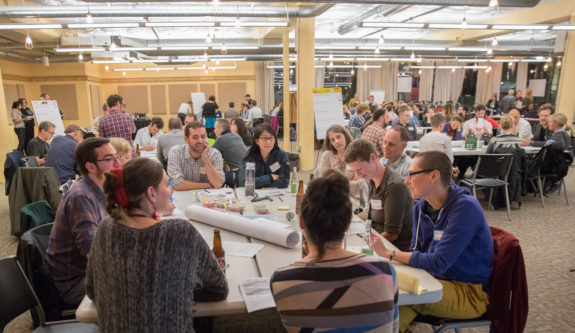 When working in communities of color, Seattle Neighborhood Greenway strives to partner with community members and organizations, and that’s exactly what we’re doing in Seattle’s main Latinx neighborhood of South Park. In conjunction with the Seattle Parks Foundation and SNG chapter Duwamish Valley Safe Streets, we are contracting with Rocio Arriaga, a leader of the South Park Retail Merchants Association, who also runs a business focused on transforming lives of people through hands-on education. As she says, “South Park is a neighborhood with a lot of ill people because of pollution. It is a small neighborhood with a lot of needs but working together we can make our environment and spaces safe to live. With this project of A Safe & Healthy Route to Connect Communities & Commerce in Duwamish Valley, more people can cover their needs of transportation, exercise and work between neighborhoods feeling safe to do it.”

Through this partnership, she hired Spanish-speaking youth to talk to their neighbors about their transportation needs and to get input on the Georgetown to South Park Trail idea. This outreach and the trail itself are laser-focused on the basic necessities of people in the Georgetown and South Park neighborhoods, because each neighborhood has basic services that the other lacks (a grocery story, library, community center, bank, playfield, health clinics, etc.).

The youth outreach team showing off some of the surveys they conducted.

The most glaring omission from the Mayor’s bike plan is lack of a single useful north-south bike route for Southeast Seattle. Beacon Hill Safe Streets, another SNG chapter, is canvassing the neighborhood to listen to what residents believe would make the spine of Beacon Hill (12th-15th-Beacon Ave) safer, more comfortable, and convenient for people walking, biking, strolling, jogging, etc. These neighbor-to-neighbor conversations help make sure any plan developed will best reflect the needs of the community, build momentum for the route, and identify supporters who are willing to advocate to complete this critical route. 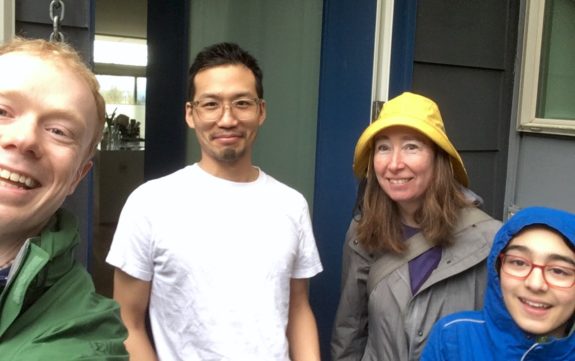 For those of you who may wonder if this kind of slow, person-to-person community-organizing is really effective for growing political power, the answer is yes — definitely. It’s critical not only to building community support for key projects, but it also helps build a base of people who can show up to testify, write letters, tell compelling stories, and put pressure on on our elected officials to do the right thing. It demonstrates that there are a large number of people who are so passionate about this issue that they are willing to spend their time talking person-to-person about why this is important —  a clear signal to politicians who are always hungry for volunteers to help knock on doors.

Get involved: This is your movement

Change in Seattle often feels painfully slow and incremental — especially when the challenges our city face around climate, affordability, and safety are so big and urgent. Other cities like, London, New York, Calgary, Paris, D.C., Chicago, and Vancouver are showing that it’s possible to quickly make transformational changes. We can, and should, demand bold leadership that makes our city into the sustainable, thriving, and equitable place we all want it to be. And I hope you will stay engaged and energized for the long haul, because we all need each other if we are going to build up enough muscle to make that big leap.

Gordon Padelford is the Executive Director of Seattle Neighborhood Greenways, Seattle’s leading grassroots advocacy organization working to make every neighborhood a great place to walk, bike, and live.
View all posts by Gordon Padelford →
This entry was posted in news and tagged gordon padelford, seattle neighborhood greenways. Bookmark the permalink.