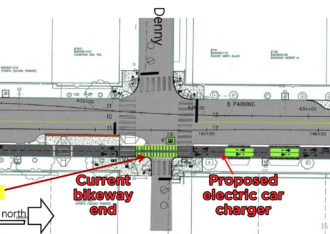 After public pushback, including by many of you, Seattle City Light has dropped their plans for an electric car charging station on Broadway near Denny Way that would have been located in the path of a planned-but-delayed extension of the existing bike lane.

In an email to people who submitted feedback on the plan, the agency cited public concerns about the bike lane (and increased costs related to relocation) as primary reasons for the change. As Seattle Bike Blog and many others noted, the presence of a car charger would likely serve as an additional barrier to a sorely-needed bike lane extension on Broadway. Moving the charger if/when a bike lane is completed would also cost City Light unnecessary expenses.

Currently, the Broadway bikeway starts at Yesler Way and ends abruptly at Denny Way, spitting people biking into mixed traffic if they want to continue to the major business district at the north end of the street. The bike lane extension is still in the most recent implementation plans for near-term installation, but it has been delayed because an accompanying streetcar extension is also on hold. We have argued that the bike lane should be completed with or without the streetcar because it is noted as a major bike route in the city’s Bicycle Master Plan.

City Light’s car charger program already takes planned bus lanes into account, but not planned bike lanes. The agency has clearly listened to public feedback about this, which is great. Hopefully a policy update will include the Bicycle Master Plan for future siting decisions.

But the debate also raised more philosophical questions about the role of electric car chargers in the public right of way, the role of public entities in funding them, and whether locations with quality transit access is a smart place to locate them. And the answers are not exactly cut-and-dry. For example, the city wants encourage people, especially those without private garages, to use electric cars instead of gas-burning ones. But if you rely on street parking, how are you supposed to keep your car charged? So the city wants to jumpstart a solution. Obviously, the best option is, “Don’t have a car at all,” but that might not work for everyone. Electric cars are definitely not the solution, but they could be part of one. If nothing else, the local tailpipe pollution is better.

So if transit-oriented development includes many new homes without car parking, wouldn’t that be a good place for a public car charger? That makes sense in a way. But major transit hubs are also place where we should be prioritizing limited curb space for walking, biking and transit. A private car sitting for stretches of time simply charging up electrons isn’t really a transit-oriented activity.

This points to one major reason electric cars won’t save us: They still take up as much space as a gas-powered car. In dense neighborhoods like Capitol Hill, it would be impossible to serve a significant number of electric cars at the same time because there just isn’t that much space, nor should there be.

There are also serious equity questions to answer here. Should the public invest money in and reserve public curb space for something available only to people who can afford pricey electric cars?

But if the city can learn from experimenting, like this bike lane conflict lesson they are learning now, then perhaps they will be able to create a charger permit scheme that works better for everyone.

From a City Light email:

As a result of the feedback we received, City Light has decided to withdraw its Electric Vehicle Charging in the Public Right-of-Way (EVCROW) permit for the utility’s proposed DC fast charger site on Broadway.

City Light heard from community members and stakeholders in the Capitol Hill neighborhood that:

Seattle City Light appreciates the feedback we have received from the community about this pilot program and the proposed site in Capitol Hill. City Light will continue to explore sites for EV charging throughout the utility’s service area. If we find a feasible site in the Capitol Hill area, we will engage the community and stakeholders again.