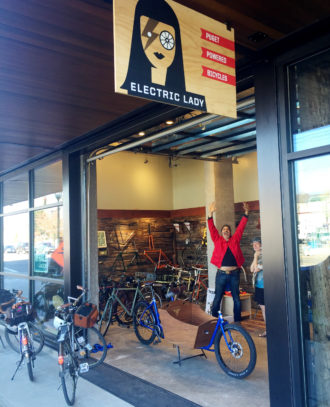 Alex Kostelnik is getting out of the e-bike showroom business. After nearly three years on the front lines of a volatile e-bike industry, selling shiny new bikes out of the Central District’s Electric Lady, he finds himself looking longingly up E Union Street where, just two blocks away, his first shop 20/20 Cycle is still grinding away to keep the neighborhood rolling.

“I’ll sit on the bench in front of 20/20, and within ten minutes I’m sharing a cookie with a neighbor and petting their dog, and they sat down to join us, and they’re going to be late to wherever they were going,” said Kostelnik during a long interview on the shop floor of his soon-to-be-closed shop at 23rd and Union. “That’s what I thought I would be doing with e-bikes, but it turns out the bike industry would have none of that. Which is too bad because I would argue that my system is actually a prescription for health for the e-bike industry, and that they are absolutely missing the boat in terms of investing in actual community.”

Founded in 2016 and staffed in recent years by Anthony Beauchemin and Lee Corbin, Electric Lady (a Seattle Bike Blog sponsor) is putting its stock of e-bikes and cargo bikes on sale and will close its doors in the coming months. Their retail space is already listed online.

Kostelnik says the business is doing well financially, but he is not enjoying the work needed to navigate what he sees as an unreliable industry where companies start up, go under, fire staff and get bought constantly. And Kostelnik’s proudly anti-corporate mentality was destined to butt heads with major players in the bike industry.

So with the used-bike-focused 20/20 Cycle up the street waiting for him to return, he is getting out. 20/20 will still sell some e-bikes, but they won’t have a showroom full of them ready to test ride.

“The bike industry is insane, in constant flux, does not know its ass from its elbow, is throwing so many spaghetti noodles at the wall to see what sticks that you’re in a room full of noodles that are sticking all over the place,” he said. “The cutting edge of the bike industry is about as sharp as a butter knife. They don’t know what they’re doing and it’s random insanity.”

He also had trouble connecting with a customer base that is very different than the customers at 20/20.

“The genesis of Electric Lady was to bring a vision of electric cycling to Seattle through my experience and my expertise and to deliver that to people, and that has worked about 30 percent of the time. The other 70 percent of people are endlessly lost in user groups and social media. They’re first time riders, but they’re not first time riders that are stepping up to the plate to hear about the community or join the community. They’re sort of strange outsider, know-it-all lonely people who aren’t really part of our community, and I don’t know where to begin with them.” The shop was open during this conversation, but the customer test riding bikes must have been part of the 30 percent because she seemed amused by Kostelnik’s trademark unfiltered candor.

“So basically, I’m just using so much energy to try to present the world of e-biking to my customers that I want to, and most of that energy is going into just trying to create status quo, and for how I see fit to do things, that’s just using up my energy. And we decided that a better way to serve our customers is to cut that overhead and be more direct with people and for our community who already get a lot of it. People who are commuting because they really well need to. That’s my people.”

Ultimately, it was “a delicious concoction that includes burnout as one of its spices” that led Kostelnik to realize he would be happier if the shop just closed. Plus he wants time to build a treehouse with his kid, he said.

He is not looking to sell because the shop is so close to 20/20, so closing the doors is the only option.

“We make money. It’s been a success. We have a beautiful shop. It’s a profitable business. I did all the heavy lifting. The non-union grocery store is coming soon across the street. The super-gentrified 30,000 square feet of retail is coming on the other side of the street. We’re poised, literally poised, for our golden year, and I’m out. Because what I didn’t factor into my business plan was me. I factored in the demographic and everything else, it was me. I ended up just endlessly being in these battles, and friends of mine would say, ‘Man, you look tired.’

“There is only so much time in the day, and I just choose not to spend it going, ‘No. What? No. Why? No. Why won’t you do that for my customer? This is entirely fair. Send that part.’ And then after like eight calls, they send the part.

The bike industry at large is going through some very tough times, and e-bikes represent a growing source of sales and profit. But selling and servicing them can be a challenge when companies boom and bust, leaving bikes on the streets without a source for replacement parts. And with many makers going with a direct-to-customers sales model, it’s hard for major traditional bike retailers to stay afloat. The major industry trade show Interbike has been cancelled, which is a pretty clear omen of how things are going for the industry at large. Performance Bikes went bankrupt in November, leading to the sudden closure of more than 100 locations including in the U District, for example. And though selling direct to customers online might make the bike cheaper up front because it skips over the local retail markup, direct sales companies rely on those same shops to service their bikes. So the industry is sort of eating itself from within.

Of course, Kostelnik hasn’t shed many tears for a corporate giant like Performance. “I couldn’t be more delighted. And I’m not surprised.

“I know that bike industry. You’ve got guys with cologne in Dockers mansplaining to women about cycling who have no innovations regarding cycling whatsoever. The bike is a toy. The bike is for sports. It is none of those things, and that’s Darwin at it’s best. That’s on you, bro. That’s on you, Performance.”

He then told a story about how he used dumpster dive bikes behind the North Carolina Performance Bikes headquarters, because of course he did.

UPDATE: Kostelnik added more thoughts in the comments below:

I have learned so much. I’ll miss my little E-Bike shop- the space is lovely. The sound system is to die for. On the other hand, 20/20 Cycle is a truly special business- more than even I realized. We have a very particular, unique clientele, and we have just the shop for them- it’s punk rock, it does a huge volume of business (it always has) and we are a community like Seattle had 15 years ago- it’s a pre-gentrification fortress of joy!

We are arguably the most concentrated “bullion-cube-of-old-school-quality-funk-&-integrity” on the West Coast.

I really had a great run- everything technically worked at Electric Lady and I love my friends at Gazelle, Xtracycle, Grin, Bike Swift and Tern. We build a good, strong, mutual relationship. I will keep these guys- and move it up the street. (Scaled down of course!)