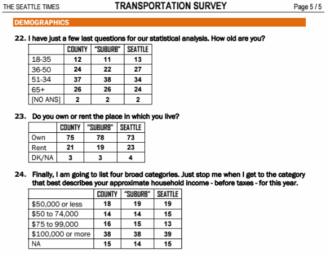 Demographics from the Elway/Seattle Times survey. These are not representative of King County or Seattle.

You may have seen a headline from the Seattle Times going around this weekend saying that people in Seattle and Kind County don’t like bike lanes. Well, it’s not really as simple as the headline might suggest.

I’ve been thinking about the poll for a couple days now, and we should get one thing out the way: It’s never great to see bike lane support in any context from any sample of the population be below 50 percent. The Elway/Seattle Times poll found 40 percent of respondents in Seattle and 36 percent in King County support more bike lanes. Those aren’t devastating numbers (did anyone think bike lanes were not divisive?), but they sure aren’t great.

So while this post will dive into some serious caveats, let’s be clear that there is still work to do to get more bike lane buy-in from more neighbors of all ages.

But it is important to note that just over half the survey sample came from landline phone calls, and reporter David Gutman notes that 75 percent of respondents were homeowners, a far higher rate than the 57 percent countywide rate. Homeownership and the presence of a landline means these results are going to be quite skewed older and wealthier. Indeed, the majority of respondents were older than 50. A quarter of respondents were 65 or older, but the 2010 Census found that only 11 percent of county residents were in that age bracket. That’s a huge difference that’s going to have a big impact on the results.

Since we already know that bike stuff is less popular among older populations, it’s not surprising to see bike lanes get lower marks in this survey. The Times didn’t release a breakdown by demographic, but I bet bike lanes got less popular with each age bracket increase. Bike advocates and organizers should be looking for ways to make sure they are reaching people of all ages, so that could be a worthy takeaway from this survey.

Nearly 40 percent of respondents made $100,000 or more annually. Renters and young people are dramatically underrepresented here. And though the Times did not publish racial demographics, black homeownership has plummeted in the Seattle region in recent decades.

Elway is a respected survey firm and Gutman is a solid reporter. But getting an accurate poll is very difficult and expensive these days, and it’s especially hard to reach renters. It just is not accurate to present the opinions of older homeowners as though they are the opinions of the general population. A person who rents is just as important as someone who owns a home, so their opinion is also just as important. I mean, one of the ideas that got even lower marks in survey than bike lanes was allowing more apartment buildings that have no car parking. People looking for cheaper rent are going to have a much different opinion about that than homeowners who already have a place to live, so that hardly seems fair.

Gutman notes some of the shortcomings of the sample in the story, but that nuance was lost on the headline writer. And since many people don’t get past the headline, now there are ton of readers who think nobody likes bike lanes. And that is not true.

The context of the survey was also about traffic, and traffic mitigation is only one reason to build bike lanes. In fact, it’s far from the most important reason, which is safety. There are many people who want streets to be safe for everyone, but who don’t necessarily believe that bike lanes are going to improve traffic.

So, once you take in all these caveats, maybe 40 percent isn’t so bad from this survey. Again, people have a lot of work to do to shift our transportation culture and get more people, especially seniors, to see bike lanes as a positive addition. But don’t let the Times headline make you believe this survey shows that bike lanes are unpopular.

To flip all this around the other way, it’s pretty incredible that even a skewed sample finds little support for trying to make it easier to drive. This was a friendly sample for driving, and yet “making it easier to travel by car” got lower marks than bike lanes. Even this sample clearly sees the solution to traffic is to make it easier to get around without a car. Only five percent of Seattle respondents (eight percent in King County) said they blame a lack of investment in roads and highways for the traffic. That feels like a pretty serious culture shift from the highway-building focus of the 20th Century.

Founder and Editor of Seattle Bike Blog.
View all posts by Tom Fucoloro →
This entry was posted in news and tagged david gutman, seattle times. Bookmark the permalink.