Aside from some untreated ice patches, biking was a great way around Day 1 without SR 99 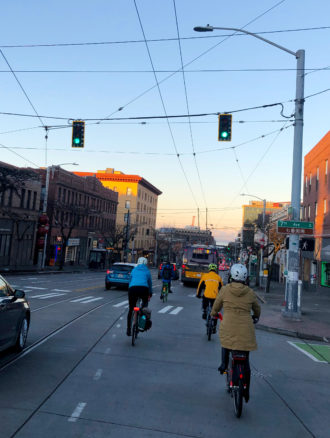 Biking around the city this morning was amazing. Sure, the weather helped a lot, with clear skies and a jaw-dropping sunrise fueling my ride to join the SE Seattle Bike Train. No matter how many times I experience it, the beauty of this place always inspires me while biking around town. But it was also amazing to see so many other people out biking and experiencing it with me.

We won’t know for sure until tomorrow when the bike counter data rolls in, but anecdotally it sure seemed like more people biking than on a typical January weekday.

I caught a ride on the inaugural run of the SE Seattle Bike Train 7:30 Local via Beacon Hill. Going into Monday, West Seattle and Green Lake also had community-organized efforts to teach people how to bike downtown and give them an opportunity to try it with a group. More of this, please!

Not everyone can easily bike to work, so there’s a fine line between spreading the word about how great it is to bike and gloating. It sucks if you are truly stuck driving in traffic, and it’s not worthwhile to rub that in. But there are a ton of people driving who could bike if they gave it a shot. And the closure of a highway is a great time to make the leap.

It wasn’t all smooth riding, unfortunately. I have received multiple reports of unsalted ice patches in known problem areas, including the turn at the north end of the Westlake Bikeway, a section of the Beacon Hill Neighborhood Greenway, parts of the Ship Canal Trail, the Alki Trail, the Missing Link and the sharp rail crossing on the Burke-Gilman Trail near 6th Ave NW, where a true hero was out warning folks:

There was a very enthusiastic man standing at the bend this morning warning cyclists to slow down. I think he might be an employee of the bike shop that's right there. Thanks, enthusiastic man!

Viaduct closure or not, SDOT should have protocols that kick in whenever overnight lows drop into the 30s to make sure known problem spots are properly treated. Though any stretch with ice can be a problem, the worst spots are curves that are shaded from morning sun. 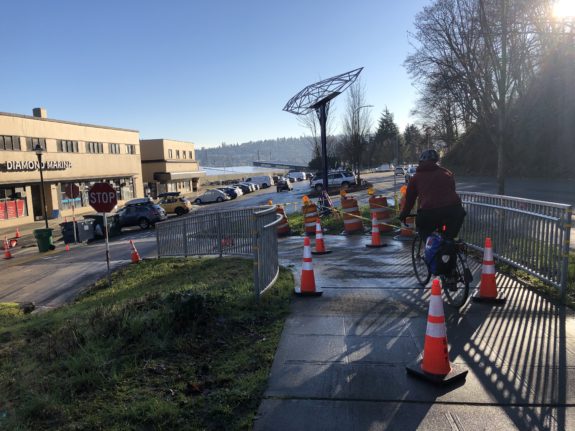 Deicer and cones were added to this turn at the north end of the Westlake Bikeway, a spot that gets notoriously slick when temperatures drop overnight. 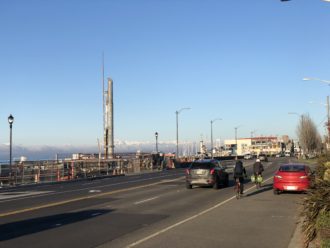 I also took a ride along Alaskan Way downtown and was pleasantly surprised to find it not only much quieter (thanks to the lack of traffic on the Viaduct above) but also not particularly busy. I thought that the road would be packed with people trying to get around the highway closure, which I was worried might make an already incomplete and stressful bike route even worse. But if anything it seemed lighter than usual. Again, I don’t have official data to back up my hunch, though.

One improvement that could really help a lot more people bike downtown is a bike lane from the Elliott Bay Trail to at least Pier 66 if not the Seattle Aquarium. From there, the existing substandard waterfront trail picks up and is at least usable, though many prefer to remain in the street rather than navigate around people walking in the trail. If the city really wants to shift Viaduct trips to bike trips, this connection is vital and can’t come soon enough.

Now, here are a few scenes from the morning’s commute:

One of the things I love about walking and biking is that you get to spontaneously see your friends more often! This morning I randomly got to bike to work with @blitzurbanism.

It was also a beautiful morning, and took the same amount of time as last week. #MyCommuteWasAwesome pic.twitter.com/twDyKKuza5

Brisk but beautiful morning for a bike ride! Feeling the #Viadoom and Gloom? Try biking to work: you might get views like this of Rainier… #MyCommuteWasAwesome @sngreenways @WSeaBikeConnect pic.twitter.com/XQugKWZpqm

While #MyCommuteWasAwesome, and I have a nice place to live, others are stuck in traffic or living in tents.

My morning walk commute was lovely! Some good kiddo time on the way to preschool, then down the hill. The cold and clear days are so invigorating! #MyCommuteWasAwesome @SNGreenways https://t.co/NGYfpb6doGhttps://t.co/X0UukNaj9O

Today was the first business day of the #JennyJam, but since I commute primarily by bike, #MyCommuteWasAwesome pic.twitter.com/aErvOxN6l9

I led a Bike Train into downtown from Othello (okay technically the train started in Columbia City) to Downtown and I'm glad I could help other commuters by leaving my space on transit for someone else to use who needs it!#MyCommuteWasAwesome🚂🚲🚲🚲🚲🚲🚲 https://t.co/erkP8XcgaX

Enjoying everyone’s #SEABikes updates for Day 1 of the #SeattleSqueeze. I snuck by a few extra cars stuck in traffic on 15th Ave this morning but otherwise had a very normal (if frosty) commute#ViaWhat pic.twitter.com/1QQvZDDrCB

Caught the last bit of fog off the Green River Trail pic.twitter.com/tRVyANjqtU

This entry was posted in news and tagged sr 99, surviverealign99. Bookmark the permalink.

8 Responses to Aside from some untreated ice patches, biking was a great way around Day 1 without SR 99