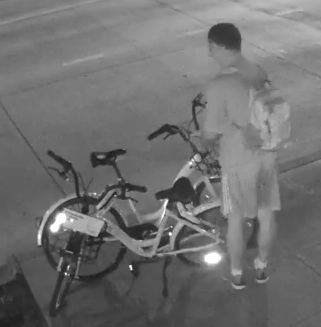 Screenshot of the suspect, from a surveillance video released by Seattle Police. Watch the full video below.

Seattle Police have released a surveillance video of a person in Sodo seen snipping bike share brake cables on more than one occasion, and they’re asking for the public’s help identifying the suspect.

For months, brake cables on bike share bike have been cut all over the city, posing a very serious safety hazard for users. If someone didn’t realize they had no brakes until they were already moving, they could be put in serious danger. Endangering the lives of random strangers is very disturbing behavior, and I hope the person in this video is identified and gets the help they need.

On top of that, snipping brake cables puts scores of bikes out of commission, making bike share less reliable for people just trying to get around town. It also costs companies a money to send workers all over town repairing the damage. Some bike share companies have been talking about hiding brake cables in future models.

It’s not clear if the brake cable sabotage is the work on multiple people or just one prolific vandal. I hope it is just one person. Here’s the video:

Seattle police are seeking the public’s assistance in identifying a man suspected of sabotaging brake lines on several bike-share bicycles in SODO.

Surveillance video shows the man walking up to several bikes parked at 4th Avenue and South Main Street around 11:45 PM on June 14th. He can be seen manipulating what appears to be a cutting tool around the bikes’ brakes before he walks out of frame.

Police also found surveillance photos from a month earlier, which appear to show the same man damaging a single bike’s brakes near 4th Avenue and Holgate. This incident also occurred in the late evening, around 11:15 PM.

Detectives are also investigating other similar cases in other parts of the city, but have not yet confirmed any linkage between the incidents.

If you recognize the man in the video or have any other information about this case, please contact South Precinct detectives at (206) 386-1855

This entry was posted in news and tagged bike share, crime, sodo, spd. Bookmark the permalink.