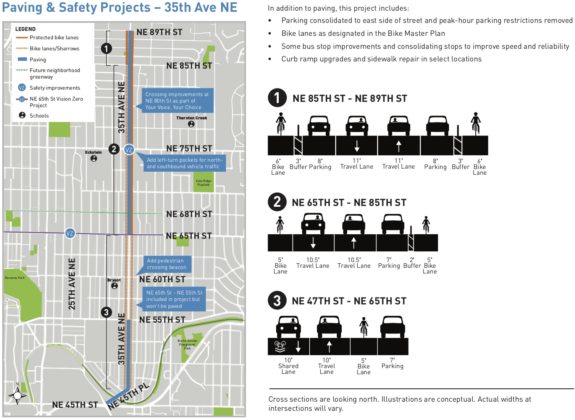 While I was on family leave this winter, a seemingly routine repaving project in Northeast Seattle somehow became a flashpoint that has divided neighbors, spilling gallons of red and green sign-making ink and even drawing competing streetside protests.

It has been frustrating to watch this debate unfold, especially since paving projects like 35th Ave NE are such obvious opportunities to build sections of the Bicycle Master Plan. If the city is going to tear up a street and rebuild it, then it costs very little to rebuild it with the bike lanes called for in the City Council-approved bike plan. This is not only fiscally responsible, it is also a vital strategy for building a complete bike route network that people of all ages and abilities will feel comfortable using.

And with 113 collisions reported in just five years, it would be irresponsible to invest in a complete rebuild of the street without making safety improvements for all users. 35th Ave NE is far from the most dangerous street in Seattle, but that says more about those other streets than it does about SDOT’s plan to improve safety on 35th.

So far, city leaders are still standing behind the project. Cascade Bicycle Club put together a handy online form you can use to thank Mayor Jenny Durkan and Councilmember Rob Johnson for their support:

Thanks to direct support from @MayorJenny & @CMRobJohnson 35th Ave NE safety improvements will move ahead. Take a minute now to thank Mayor & Council to let them know you stand with them on investing in safe streets to ensure we all get home safely: https://t.co/djFmIkNnKT pic.twitter.com/kHdmnTAH7j

But before I get into how project opponents (“Save 35th Ave NE”) and supporters (“Safe 35th Ave NE”) differ, it’s important to restate the points where nearly everyone agrees.

This is a pretty significant amount of agreement, really. And SDOT’s plan for the street, which is already under construction, is designed to meet these goals. So how did this turn into a neighbor-vs-neighbor battle?

Well, the shortest explanation lies in that persistent thorn in the side of efforts to make streets safer and more multimodal: Car parking. Even though the city’s stated transportation and climate change priorities clearly call for prioritizing walking, biking and transit, efforts to even consolidate car parking still often face a backlash.

The best way to overcome such a backlash is to build community around a multimodal vision for a street that is better at bringing the community together. The city is investing serious money in this neighborhood’s main north-south drag, and the result will be a vast improvement for all users. The street will be more comfortable and accessible to cross on foot or with a mobility device, buses will be more reliable, fewer people will crash their cars and more people will feel comfortable biking once the stress of mixing with people driving is gone. This is a wonderful vision for the future of the neighborhood.

But for whatever reason, that is not what happened as the city prepared the construction contracts for 35th Ave NE. Instead, the debate turned into the same tired bikes vs car parking fight that has been fought so many times before. Some people defending all car parking on the street have turned to anti-bike rhetoric as though their neighbors who ride bikes are either their enemies (“Save” 35th from whom? People riding bikes?) or don’t exist. And some people who support the changes have responded with parody, even dressing up as dinosaurs to mock the parking supporters.

I’m not saying civic debate always needs to be civil. But it sucks to see neighbors turn against each other like this over something as silly as how you get around town and whether car parking needs to be on one or two sides of the street. There are so many bigger issues in our city. And according to approved city transportation policy, we have already decided this one.

But once people start to lose faith in SDOT, the door opens for people to second guess all the decisions and policies that led to this design. And that’s exactly what has happened here.

I had a long chat recently with Amy Stephson, an attorney and one of the “Save 35th Ave NE” organizers, who sent me a memo (PDF) she was hoping to publish here as an op-ed. The memo attempts to discredit Vision Zero, the effectiveness of bike lanes in general and SDOT’s 35th Ave NE studies. I won’t go line-by-line here to refute the memo’s claims, but in general it contains a very lawyerly mix of unsupported claims and citations of conflicting studies that attempt to muddy the city’s reasons for making changes to the street. It doesn’t refute the city’s plans, it just seeks to cast doubt. It is titled “Myths & Misrepresentations,” but it largely offers its own misrepresentations in return.

I told Stephson I wouldn’t simply publish it as such, but that I would love to speak with her to learn more about where she is coming from. It was clear to me from our conversation and the memo she sent that there is a core disagreement about the viability of biking as a mode of transportation. She doesn’t think more than a small percentage of people will ever bike in Seattle. Fighting to stop the planned bike lanes makes perfect sense if you don’t believe bike lanes or Vision Zero will ever work.

Stephson isn’t a villain, we just don’t agree. I told her I look forward to the people of Seattle proving her wrong as more bike lanes do succeed in significantly expanding the number of people who get around by bike (as happened this year on 2nd Ave downtown). She wasn’t convinced by my arguments, and I wasn’t convinced by hers. We pretty much both agreed that agreement seemed beyond reach. So in such situations, the city must look to its established and Council-approved policies for guidance. And unfortunately for Stephson and Save 35th, those policies support SDOT’s plans.

That said, Stephson is clearly a passionate organizer, as are many of the other neighbors working with her. And everyone agrees that neighborhood businesses are vital and need to be supported. Bike lanes will help more neighbors bike to businesses instead of driving, though this may not sound like an appealing option to people who don’t believe biking will ever really catch on.

But even car parking can be better organized and designed to support businesses. If the street changes are completed as planned, the city should keep a close eye on parking along 35th Ave NE businesses districts. If it is does start to fill up beyond capacity as some fear (SDOT study suggests it will not), the city should take quick action to better manage parking in the area. For example, time limits on parking could help make sure the spaces in business districts are used for business access and not for people to leave their cars all-day or for multiple days in a row. These strategies can also be extended to adjacent blocks of cross streets as needed.

I hope when this is all over, neighbors can find projects to work on together. It would be really depressing if the “Save” vs “Safe” battle lines harden into an ongoing Red Team vs Green Team neighborhood dynamic.

And I hope city leaders learn some lessons from this experience so future projects don’t end up in such a divisive place. It is possible for neighbors to disagree without forming color-coded sides, and that begins with how the city presents proposed changes. SDOT and political leaders set the stage for debate. If people think the only way to win is to have the most signs or most petition signatures or most bodies at a meeting, then organizing into competing camps is the obvious and expected result. Maybe I’m just being naive to think there is a better way. But while an us vs them strategy might work for some bigger political issues, it is terrible for a neighborhood.

35 Responses to 35th Ave NE safety changes still on track + How can the city avoid such divisive neighborhood fights?