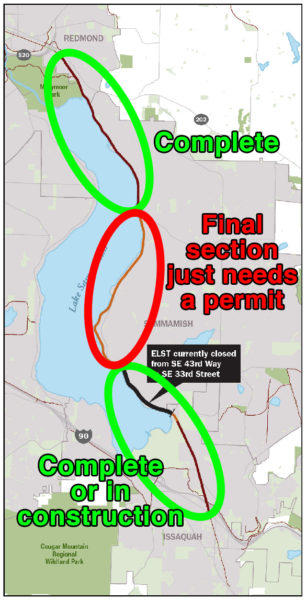 The legal battle to complete the E Lake Sammamish Trail between Redmond and Issaquah continues, heading to the City of Sammamish Hearing Examiner next week.

The majority of the 800+ comments received about the trail project were supportive of King County’s plans for the regional rail trail, but Cascade Bicycle Club and the Friends of the E Lake Sammamish Trail sounded the alarm this week after noticing these comments were missing from the City of Sammamish’s summary of public comment.

To ensure that the Hearing Examiner hears from trail supporters in addition to opponents, the two groups are urging people to head to Sammamish City Hall at 1 p.m. November 3 to sign up to give public comment in person. You can also RSVP online to let Cascade know you’re coming.

The final 3.5 miles of the trail are designed, funded and ready to break ground. The county just needs a construction permit from the City of Sammamish without restrictions that would make the trail less safe.

This January, as a part of the public process to accept public comment and input, the city of Sammamish received over 800 public comments about the design for the final 3.5 mile segment of the East lake Sammamish Trail (ELST). The majority of comments supported King County’s application for the final shoreline development permit, which is needed to complete the trail to safe, paved, regional trail standards. Only a trail designed to these standards will make for an intuitive expeirence that is safe for the many trail users who walk, run, bike or roll.

The comments were an exciting outpouring of support from caring neighbors and trail users from near and far, and included many unique and personal stories about why the ELST is important to a whole host of different people.

Surprisingly, comments that voiced support for designing the trail to create safe spaces for all users were ignored in the City of Sammamish summary record of comments received (page 9). That summary, and the proposed trail design now heads to the city hearing examiner, who’ll decide whether to issue the shoreline permit – the next step towards construction of the final trail segment.

The omission of scores of comments is a blow to the hundreds of people who spent time crafting and communicating comments. And it means we don’t know if the decision about whether to issue the permit will be made by balancing the differing perspectives fairly.