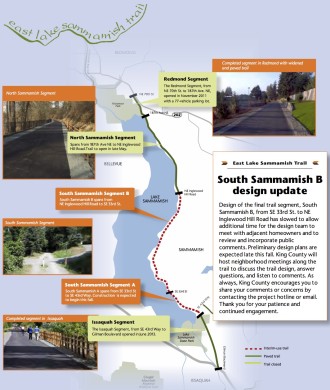 King County’s plans for a complete and glorious E Lake Sammamish Trail made it past a major legal hurdle this spring, and now the plans are moving forward.

The trail has been a long time coming, drawing big public support as well as some wealthy opponents and the City of Sammamish. The trail is a major link in the regional biking and walking network, but it is also a fantastic linear park.

The northernmost section of the trail was completed in 2015, showcasing the potential for the rest of the route. It will be a wonderful addition to the City of Sammamish, but the city’s Council needs to hear that support from the public.

It’s time to stop fighting and work with the county to create what could be the city’s premiere public asset. A lot of community input has already been considered in the design, which even went tree-by-tree to maintain what can safely be maintained. This is what compromise looks like. Now it’s time to move forward.

So if you can, Cascade is calling on trail supporters to voice their support before the meeting today (Tuesday). More details:

Completing the trail to national standards through the City of Sammamish sections will enable people of all ages and abilities to use the trail as a transportation and recreation amenity — whether on foot, by bike, with a stroller or use of wheelchair.

Trail development has been slowed for years by lawsuits, costing time and public money. We at Cascade Bicycle Club are committed to seeing the project through: a trail built to national standards in its entirety is necessary for access to this public amenity by users of all ages and abilities. To end delays to the trail the City of Sammamish needs to hear from Sammamish residents and trail users.

How Can You Help?
Come to the October 18 City of Sammamish Council meeting and speak up during the public comment section at the beginning of the meeting. Each member of the public has 3 minutes to speak.  Thank the City Council for their time and tell City Council why completing the trail matters to you.

Founder and Editor of Seattle Bike Blog.
View all posts by Tom Fucoloro →
This entry was posted in news and tagged city of sammamish, e lake sammamish trail. Bookmark the permalink.