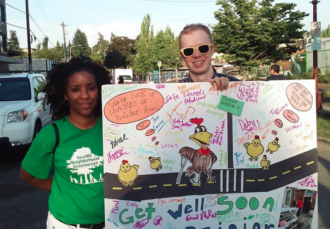 With Founder and Executive Director Cathy Tuttle retiring, Seattle Neighborhood Greenways staffer Gordon Padelford is getting ready to take the organization’s helm. He will be the first ED of the organization other than Tuttle, who founded it in 2011 and led its formation into a 501(c)(3) non-profit the next year.

“I’m incredibly grateful to have her as the leader of Seattle Neighborhood Greenways, and I’m sad to see her go,” said Padelford.

The change in leadership will happen “as soon as we hire the two staff,” he said. That’s right, SNG is hiring a Communications/Development Coordinator (PDF) and a Community Organizer (PDF) right now. Applications are due June 8.

From its start, SNG has been a volunteer, grassroots-fueled coalition of neighborhood groups focused on making their local streets safer, more multimodal and more fun. The coalition list now includes nearly 20 groups throughout Seattle. Localizing groups has been the key to its success, since people are extra motivated when it’s the streets their family members and neighbors use that are at stake.

Padelford first got involved with SNG as a volunteer leader of Central Seattle Greenways, but he quickly because a vital part of the whole organization. Since its early years of fast growth, with new groups starting up in all corners of the city, SNG has raised money and hired staff, including Padelford, to assist the volunteers by providing resources or organizational help.

In his years at SNG, Padelford has gone to approximately 15 billion meetings to help guide local work. But he has also grown his work to include development of new citywide policy initiatives like the safer speed limits rules passed last year. It is hard to find work that Padelford has done on his own because his style is to work with many partners as often as possible. Thus all those meetings. But its that kind of work that has made SNG an indispensable part of local transportation advocacy.

And yet Padelford says one of the hardest adjustments the organization will have to make is losing the even more enormous amount of work Tuttle puts in.

“I am a mere mortal, unlike Cathy,” he said. That’s why SNG is hiring two positions.

As for what’s in store for SNG going forward, “I’m not gonna rock the boat a ton,” said Padelford. The organization will probably continue its shift to be “focused more on pedestrain advocacy than we have in the past,” he said.

“We have a really solid base of advocates, interest and support, and I look forward to growing it.”