Dispatches from the WA Bike Summit: Dr. Adonia Lugo on ‘fighting for the better world we know when we’re out on a ride’ 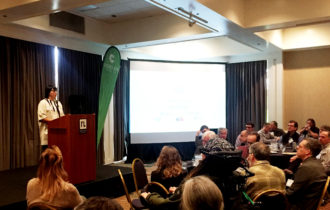 As I write this, people from all over the state are volunteering their time to meet with their state Representatives and Senators and urge them to support biking, walking and transit during the legislative session. That’s pretty cool.

Below is the first of several notes from the summit. I’ll keep posting as I get them written, so be sure to check back.

Just a couple days after Donald Trump was elected President, Dr. Adonia Lugo flew from L.A. to Atlanta to attend The Untokening, a conference she helped organize that was designed to be a majority-people-of-color event for people working “for just and accessible streets and communities.”

But the election took the wind out of her sails as the headed to the conference, Lugo said during her keynote speech Monday. The work seemed so small in comparison to the threat Trump posed to so many communities in the nation.

Yet bicycling can be a part of the movement for a different vision of the world than the one Trump campaigned for.

On a personal level, the bicycle can be a tool of “individual resistance to toxic systems.” But this personal empowerment can also spread and build community.

“We have something to offer to the broader movement for a better world,” she said. “Feeling powerful in our bodies, and the desire to share that with other people.”

In that way the bike can be “a force of organized resistance,” starting with the simple act of getting out and spending time together.

“We need to rise above the xenophobia and hate that is corroding our culture and spend more time together,” she said. We need to be “fighting for the better world we know when we’re out on a ride.”

So much of bicycle advocacy has been focused on infrastructure and pursuing power through political connections and government budgets. But there’s another kind of power created through building a social movement, and that’s what Dr. Lugo wants to see.

Because strong social movements are “where solutions to sustainability and environmental justice can emerge.”

(DISCLOSURE: Adonia and I are friends and worked together on some bike organizing efforts when she lived in Seattle a few years back, including the 2011 Safe Streets Social.)