For the second annual Emerald Bike Ride, Cascade Bicycle Club is scaling up big time. The full route is longer, the start location is bigger and the rider limit has been set at a stunning 10,000 people. That’s 3,000 more people than the sold-out 2016 ride. If the 2017 event also sells out it would reach the same size as the club’s signature Seattle-to-Portland ride.

The May 28 route, announced this week, remains focused on providing bike access to freeways where biking is banned. The ride includes the I-5 Express Lanes and the 520 Bridge as it did last year. So if you regret missing a rare chance to bike on car-free freeways last year, you will have another chance.

But instead of going out and back on 520, the route will travel through Medina and Bellevue to connect to the I-90 Express Lanes leading back to the new start line on Occidental next to CenturyLink Field (why they dropped “City” from the former “Emerald City Bike Ride” name). This is almost certainly your only chance to bike on the I-90 Express Lanes, since East Link light rail construction is already underway and will soon occupy that space.

The full 24.4-mile route only includes 1,237 feet of climbing, a nearly impossible feat in this hilly region outside of the freeway system. There is also a cheaper, flatter and shorter 10-mile route option up and down I-5 for people who can’t or don’t want to bike 24 miles.

The biggest catch is that unlike many other open streets events in Seattle and across the world, this ride costs money. That’s not exactly Cascade’s fault, of course. It costs a lot of money to plan and host such a gigantic event. And the ride is a fundraiser for Cascade’s education programming.

The full route is $40 for non-members if you register online (there are discounts for members and youth as well as scholarships). Online registration is set to close May 24, or earlier if it sells out.

The experience is worth the cash. 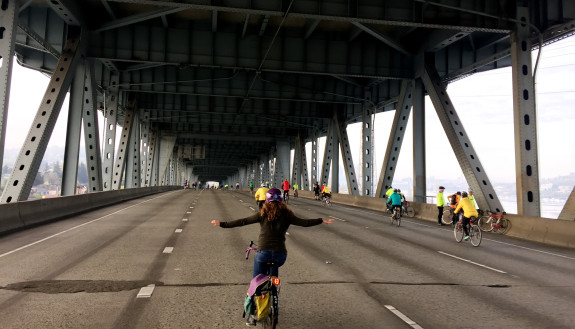