Juries side with two people severely injured while biking in Seattle

Juries in two separate cases that concluded in recent weeks awarded large sums to people injured while biking in Seattle.

Thyce Colyn, 51, was awarded $38 million after a jury found Standard Parking fully liable for a 2012 collision near the downtown Grand Hyatt Hotel that left him severely injured.

The jury found that valets systematically made dangerous mid-block crossings of 8th Ave in order to save time parking and retrieving cars for hotel guests, and the company did nothing to discourage this behavior. That shortcut was responsible for the collision, so the company is liable.

Valets in Seattle shuttled cars belonging to visitors at the Grand Hyatt Hotel to the garage at the nearby Olive 8 residential tower, where more room was available, [Colyn’s attorney David] Beninger said. They drove from the Olive 8 across Eighth Avenue into a surface parking lot, and used alleys, instead of making a longer trip on streets and four intersections, according to plaintiff’s court documents.

“This kind of stuff was going on the entire time they were having the valets,” Beninger said Thursday night.

Colyn was riding north, in the right lane, at 4 p.m. on Oct. 8, 2012, from his job in Sodo to home in Ravenna. The lane was marked by “sharrows” — white bicycle-shaped icons — designed to alert people to expect bikes.

The valet, 21, was bringing a car from the Olive 8 across the northbound one-way street, perpendicular to traffic, and didn’t see the cyclist, to his right, according to court documents. He was cited for failure to yield the right of way. 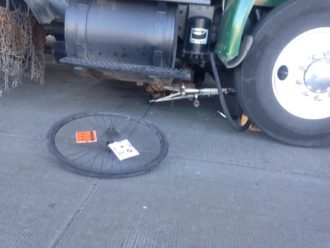 Photo of the collision that injured Gabriel Quintanilla, from SPD.

In a separate case, a jury found Seattle 58 percent at fault in a 2014 collision under the Spokane Street Viaduct, awarding Gabriel Quintanilla a total of $2.7 million with the city on the hook for $1.6 million.

The collision occurred mostly due to poor sight lines caused by pillars from the city’s Spokane viaduct widening project that wrapped up in 2012, the jury found. The driver of the truck and Quintanilla were each found 21 percent at fault.

In the Spokane Street case, city traffic engineer Dongho Chang, an avid bicyclist and safety advocate, acknowledged in a deposition that the city didn’t perform detailed studies of sight lines in the crosswalk before the $164 million Spokane viaduct project opened in 2012. (The project was designed years before Chang joined the city.)

Chang said Monday, “We are going to be reviewing our options for what we need to do at that intersection, or others.”

Quintanilla, who suffered hip and leg injuries, can walk but was traumatized by being dragged by the truck, and his injuries will probably thwart a goal he had to become a bike messenger, his attorney said.