26-year-old recovering after scary collision with semi in Sodo 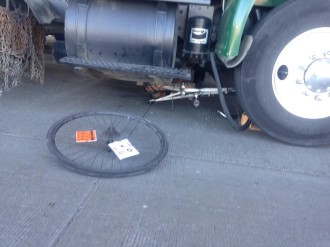 Image from SPD. You can see the man’s “Give Cyclists Three Feet” sticker in his spokes.

Firefighters had to use emergency airbags to free a 26-year-old who was struck and trapped under a semi truck near 4th and Spokane in Sodo Monday.

Images from the scene are frightening, and Seattle Police describe the victim’s injuries as “severe scrapes and fractures.” He was conscious at the scene and his injuries were described as not life-threatening.

The exact details of how the collision happened are not yet available. Here are the details so far from SPD:

A 26-year-old bicyclist suffered severe scrapes and fractures and was briefly pinned under a semi-truck after a collision in the SODO neighborhood Monday evening.

Officers and firefighters responded to 4th Ave South and South Spokane Street Just after 3 PM after receiving a report of a bicycle and semi-truck collision. The cyclist had been struck by the truck and pinned under the front axle.

Firefighters used industrial airbags to lift the truck away from the injured-but-conscious cyclist. After being freed, medics transported the man to Harborview Medical Center with non-life-threatening injuries.

Traffic Collision detectives are responding to the scene to investigate the incident.  The southbound lanes of 4th Ave South and westbound lanes of S Spokane Street will be closed during the investigation, likely impacting traffic in the area.

This is the second very serious collision involving a person walking or biking and a large commercial vehicle in the past week. Rebecca Scollard was killed in a collision with a CleanScapes garbage truck last week on First Hill.

This entry was posted in news and tagged injuries, sodo, spd. Bookmark the permalink.