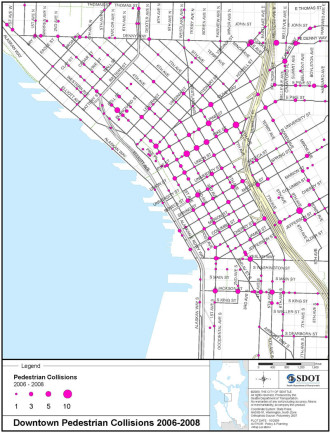 A person walking near 8th and James was killed Thursday afternoon after a person driving a waste removal truck struck and dragged the victim down the busy First Hill street.

The victim, who has not yet been identified, died at the scene.

CleanScapes issued a statement Friday acknowledging that one of its trucks was involved in the fatal hit-and-run:

Recology CleanScapes was made aware that one of its trucks was involved in the accident on First Hill that resulted in a pedestrian fatality.  Due to the ongoing investigation Recology CleanScapes is prohibited from discussing any of the details surrounding this incident.  We are cooperating fully with the authorities to assist them in gathering all of the information they need to make a determination of the cause.  Recology CleanScapes’ top priority in the provision of its services is the safety of the public and its employees.

All of us at Recology Cleanscapes would like to offer our deepest condolences to the family and friends of the pedestrian affected by this accident.

It remains unclear exactly how the collision happened, who was at fault or whether the person driving the truck knew initially that they had hit a person.

Police closed the street for several hours for investigation and have not yet released more details. Here’s what we know so far, from SPD:

Police received reports of the collision at 8th Avenue and James Street just after 3:30 PM and arrived to find the deceased victim.

SPD Traffic Collision detectives have identified the truck and driver involved in the collision and are still investigating the cause of the incident. Police have not arrested the driver of the truck, who is employed by a local waste management company, under contract with the city.

Police do not yet know if the driver was aware they had struck the victim, and have not yet established whether this is an intentional hit and run case. Police also have not yet identified the victim.

Our condolences to the victim’s friends and family. 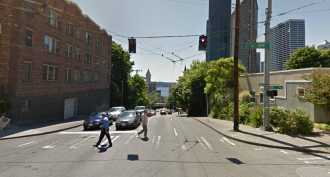 Capitol Hill Seattle reports that the intersection is one of the most dangerous spots in Central Seattle for people on foot. A busy and very steep four-lane street, James is one of the few streets that passes under I-5 between First Hill and downtown. There is a lot of high density housing in the area and a huge number of jobs at nearby medical centers, including Harborview.

SDOT data collection shows that James carries 22,100 vehicles per day, on the high end of the city’s range for changing the street to a much safer three-lane configuration (two travel lanes with a center turn lane). Both biking and walking on James is very uncomfortable today, but it is often the only option due to the limited I-5 crossings. Foot traffic in the area is high despite heavy traffic traveling so close to the sidewalk, which does not have a planting strip.

Thursday was an absolutely terrible day for people walking in the city center. Shortly after the fatal hit and run on First Hill, a suspected drug dealer fled cops in Belltown, got into a getaway car and drove erratically away. In the process, the person driving went up on a sidewalk and struck a mother walking with her one-year-old child in a stroller.

Luckily, police describe their injuries as “minor,” though they did require a trip to the hospital.

Though the suspects fled their damages car on foot, police arrested them later that evening.

Detectives are investigating a hit and run of a child and mother after driver flees police.

The suspect fled on foot and eventually got into a waiting car and took off.

Officers did not pursue the car due to the extreme risk of injury to people in the area.

The suspect drove the vehicle erratically, ran a red light and stop sign and clipped a parked car near 6 Ave. and Denny Way.  The suspect’s car continued onto the sidewalk striking a woman pushing a stroller containing an infant.  The suspect bailed out of the damaged car and fled the area on foot.

Medics transported the infant and mother to Harborview Medical Center for minor injuries sustained in the crash.

Two officers arrested the suspect near the Seattle Center just before 11:30 p.m. Thursday night.  They took the suspect into custody without incident and are booking him into King County Jail for narcotics related charges and a warrant.

Detectives will continue their investigation to determine charges related to the hit and run.