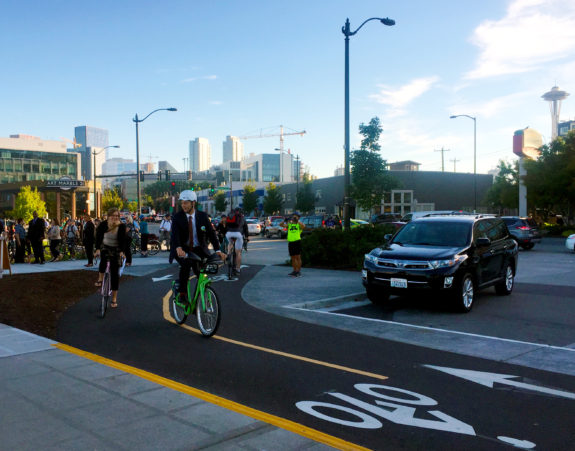 The Green Lane Project has named the Westlake Bikeway “the country’s best new bike lane of 2016.”

An arm of the national bike advocacy organization People for Bikes, the Green Lane Project helps and encourages cities to build bold bike infrastructure, focusing on high quality protected bike lanes. So even with its compromises (or perhaps in part due to them), Westlake managed to beat even an ambitious bike lane on Randolph Street in Chicago.

The Chicago project, which came in second, connects two major downtown bike routes, and those major bike intersections both have protected intersections designed to reduce conflicts and increase biking safety and comfort. Seattle has not yet tried this concept, perhaps because we have so few intersecting high-quality bike lanes. Connectivity is one of the biggest factors holding back Seattle’s bike network.

The country’s best new bike lane of 2016 is a stripe of asphalt evidence that Seattle is willing to explain, over and over again, why a parallel route two blocks away sometimes isn’t good enough.

No one who’s actually ridden a bike in Seattle’s near north side would confuse Dexter Avenue, with its 300-foot climb, with the lakeside bend of Westlake Avenue just to the east.

Fortunately for Seattle, its leaders knew the lay of the land. So they soldiered through years of negotiations and lawsuit threats to finish Westlake, finding a design that preserved 90 percent of the spaces in a relevant public parking lot. The turning point: Mayor Ed Murray called all parties into a room and forced them to hear one another out.

“If you never sit down and talk to the people who are on the other side of the table, you’re going to invent reasons to disagree,” Seattle Transportation Director Scott Kubly said Tuesday. “When it gets right down to it, most people wanted the same thing.”

What they got was a world-class bikeway: the first flat, intuitive link joining downtown Seattle to the north side and a vast regional trail network.

As the accolades for Westlake hit the presses this week, several people riding in the lane started reporting flats from new tacks on the bikeway. If these tacks are indeed being set by an unhinged person attacking strangers at random, I hope that person is caught and either prosecuted or provided help. But it needs to stop. Flats are usually just annoying, but somebody could get seriously hurt if a blowout causes them to crash.