Many people get flats from tacks on new Westlake bikeway, could it be intentional?

I have received at least a dozen emails and notes on social media in the past two days from people who say they got flat tires from tacks on the new Westlake bikeway. Evan Bush at the Seattle Times called some area bike shops, who said they’ve been pulling a lot of these tacks from flat tires in recent days.

Seattle Police are aware of the issue, and SDOT staff were out today picking them up with magnetic rollers. 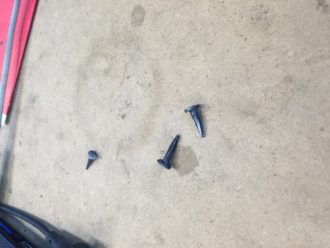 We have yet to receive any information confirming that the tacks were set intentionally by some awful asshole assaulting strangers completely at random, but both such intentional acts have occurred in Seattle in recent years (though it’s been a while).

In 2013, someone set tacks on the then-new Alaskan Way Trail. That one was almost certainly intentional since the tacks were all carefully set pointing up.

In 2011, tacks caused all kinds of problems on the I-90 Bridge Trail. That one sure seemed intentional, since it’s not clear how else they would get to a car-free part of the bridge.

In this case, the tacks are on a brand new bikeway that recently opened after years of debate and legal wrangling. I hope this was a mistake by some clumsy carpet installer. Because if it was intentional, that’s very disturbing.

A flat tire is annoying, but if someone has a blowout they could fall and get seriously hurt. Attacking people at random is a sign of a seriously disturbed person. If anyone has information, contact the police.

40 Responses to Many people get flats from tacks on new Westlake bikeway, could it be intentional?