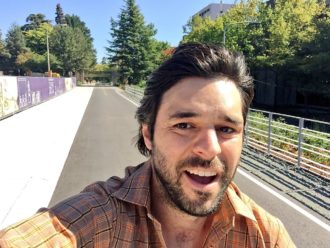 Yours truly breaking the law by riding a Pronto bike a short distance on a trail from UW Station to the Ave.

The debate about bike share in Seattle is contentious enough without bringing up one of the most divisive bike-related issues out there: Adult helmet laws.

Though I understand that it may seem counter-intuitive at first, best practices from the the safest cycling cities in the world do not include helmet laws. In fact, nearly all major cities in the U.S. and across the globe have declined to regulate bicycling headwear for adults.

But surely with good intentions, King County’s Board of Health decided in the 90s to require helmets for people of all ages, and that rule started applying to Seattle after a 2003 City Council vote to adopt the county’s regulation. 13 years later, that decision is very likely hampering the city’s ability to get the most from its bike share efforts.

How big an impact is the helmet law having? That’s nearly impossible to say for sure, but bike share experts are pretty much in agreement that it’s an impediment.

“[A helmet law] will kill your system regardless,” Baltimore’s bike share leader Scott Tillman told the Seattle Times’ David Gutman recently. “You can still encourage it, but when you pass a law like that you have a lot more challenges. Once you make it a law, you just kill it.”

But Andrew Glass Hastings, SDOT’s Director of Transit and Mobility, does not think the helmet law is a leading factor holding back bike share here.

“From the surveys that our operator does, helmets and the helmet law are not coming up as a limiting factor,” Glass Hastings told the Times. “If we really thought of the helmets as being an impediment we’d be actively trying to address the issue.”

Seattle does buck trends when it comes to helmets. While many cities saw decreases in cycling after helmet laws were enacted, Seattle has only seen more cycling since 2003. With lots of big downhills — which result in higher speeds even for people who aren’t trying to bike fast — maybe helmets just make more sense to more people for more trips here than in other places.

A helmet seems a bit silly when making a short trip to the neighborhood grocery store or transit station (the kinds of trips bike share is great at serving), but it doesn’t seem so silly going 20 mph down Fremont Ave en route to downtown. Even in places without helmet laws, helmets are nearly ubiquitous in bike racing and training.

Then again helmets are also required for car racing, yet requiring all car drivers and passengers to wear helmets seems ridiculous. The same applies to biking.

The safest cities in the world for biking have very low helmet use. Instead, those cities have found that building high-quality bike routes and increasing the number of people biking are the best ways to improve safety. Rather than focus energy on requiring people to wear a specific kind of onerous safety gear to protect against a specific kind of injury in the rare instance of a collision, why not focus on preventing collisions in the first place?

Bike share systems are flourishing all over the world in cities without helmet laws or helmet dispensing systems, and the safety record for bike share is remarkable. By getting more people on bikes, successful bike share systems make cities safer for everyone biking. More people biking also leads to other good public health outcomes, like fighting diabetes and heart disease.

Seattle Bike Blog’s stance is that King County should simply follow best practices and remove the law, or at least change it so it only applies only to minors. If you can drive a car at 16, it seems weird you can’t be trusted to decide whether the bike trip you are about to make requires a helmet.

Cascade Bicycle Club does not have a solid stance on the issue. The Times paraphrases that Cascade “encourages helmet use but does not take a position on Seattle’s helmet law.”

“It’s yet another barrier to getting on a bike,” Cascade’s Policy Director Blake Trask told the Times. “And that has a real public health impact, in terms of less riders equals less safety.”

In the end, it will take leadership in the city and county to change the law, and it’s not clear who is going to make the issue a priority. That’s the problem with well-intentioned safety laws that have unintended consequences: No politician wants to look like they are anti-safety. So even if there’s little or no evidence that the law has helped or hurt bike safety in Seattle, it’s hard to make the law change a political priority.

Perhaps the more people talk about the adult bicycle helmet law, the more people will understand the nuances of an issue that seems so cut and dried at first. And that’s a good thing. So thanks to the Times for covering it. Here’s an excerpt:

There’s the rain. There are the hills. There’s the fact that the last, smaller system failed and the new contractor has never done a project anywhere near this size.

As the Seattle City Council ponders whether to spend $5 million upgrading the city’s foundering bike-share program, there are a lot of challenges to overcome. But bike shares have been hugely successful in cities both much larger and much smaller than Seattle. Why can’t it work here, in a city with a famously active and outdoorsy culture?

There is one challenge facing Seattle’s bike share that no other city in the world has so far overcome: a mandatory helmet law.

Somewhere around 1,000 cities worldwide have bike-share programs. Fewer than five of those cities also have a law requiring adults to wear a helmet when riding a bike. No American city with a bike-share program, save Seattle, has a helmet law for adults.

Bike-share experts are all but unanimous that helmet laws, while not necessarily a fatal factor for a bike share, add another layer of complication and make the system less likely to succeed.