Det. Bach’s answers shed some light on the department’s work and offer some advice for people trying to protect themselves against theft or give themselves the best chance of recovering a stolen bike.

First off, if you do not have a record of your bike’s serial number saved somewhere, do that now. Seriously, walk over to your bike this second and do it.

“I would encourage everyone to take a current photo of their bicycle/their serial number,” wrote Det. Bach. “You can email it to yourself.”

The top question from the AMA relates to a longstanding issue for people trying to track down their stolen bike: What do I do if I find it listed online or spot it at a local chop shop? This is one of the most common bike theft questions I get as editor of this blog, and I don’t have a great answer. Unfortunately, neither does Det. Bach: 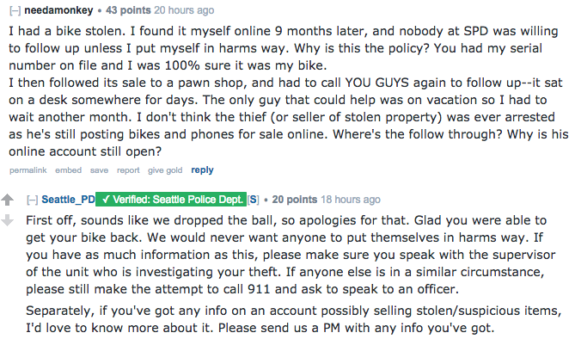 If you rely on police to get your bike back from a known location or online seller, you will often be disappointed by a lack of interest or by a simple lack of available officers (property crime is always going to be a lower priority than violent or otherwise immediately dangerous incidents, as it should be). When police response isn’t there, you are left with a tough decision: Let the bike go and likely never see it again or take matter into your own hands.

I tried the latter once, and I would not recommend it. Neither does Det. Bach. But I understand that bikes are very personal, and even if Det. Bach and I say not to put yourself in harm’s way, some people are still going to do it. Because that’s your bike!

The disconnect between people’s drive to get their bikes back and the lack of police priority has even created space for real-life bike-recovering super heroes and other bike-recovering hobbyists. This is a sign of a problem, and I worry about the day a vigilante recovery goes awry.

As a reminder, Seattle Bike Blog partners with Bike Index to provide a database of stolen bikes in the area. It’s a great way to find the owner of that bike you found ditched in the bushes near your house. It’s also a good way to make sure a used bike you are checking out was not stolen.

If your bike is stolen, be sure to report it to the police. If the thief is still in the area, call 911. Otherwise, SPD’s non-emergency number is 206-625-5011. You can also report bike thefts under $500 in value online, which will at least provide a record of the theft for larger investigative purposes.

After reporting to the police, you should also list the bike on Bike Index.

Founder and Editor of Seattle Bike Blog.
View all posts by Tom Fucoloro →
This entry was posted in news and tagged bike thefts, scotty bach, spd. Bookmark the permalink.