Seattle plan would reduce default speed limits across the city 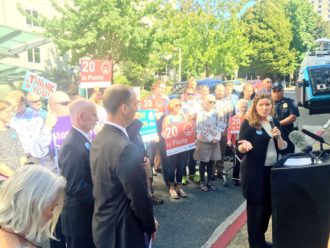 In a busy city like Seattle, a higher speed limit does little to speed up your trip because traffic and stop lights will prevent you from getting up to top speed very often. But speeds have a huge impact on whether someone is seriously injured or killed in a collision and whether collisions happen at all.

That’s why SDOT’s announcement today, flanked by Councilmembers Mike O’Brien and Tim Burgess, is so smart: Reduce the default speed limits on busy “arterial” streets to 25 miles per hour and on “non-arterial” mostly residential streets to 20 miles per hour.

The change will not affect major streets that have their own signed speeds, such as Aurora. It will only affect those streets where there are no speed limit signs. So knowledge of the change will require a significant public education effort. They will also need to change about 500 signs, mostly at the city limits, to display the new default speeds.

Councilmember Burgess called the change “the next step to achieving Vision Zero,” the city’s goal of eliminating serious injuries and deaths in traffic by 2030.

“This change would mainly impact the off-peak hours when there are more high-end speeders and more severe collisions,” notes a press release.

In fact, SDOT quietly retimed downtown traffic signals over the winter and spring to 25 miles per hour. This means that someone going 25 on certain streets will hit green lights, but someone going faster will have to hit the brakes at every stop light.

“What we saw is that traffic started moving more reliably and more safely,” said Kubly of the signal retiming project. And that makes a lot of sense when you think about how downtown actually functions.

Put yourself behind the wheel on a typical day on, say, 5th Ave. The street is rarely wide open with no traffic, so a higher speed limit doesn’t help you at all. You just crawl along at the speed of the vehicle in front of you. But in those few blocks where the road does open up, you hit the gas and get up to 35 or 40 before slamming on the brakes at a red light. You’ve cut effectively no time from your trip, but for that block or two your car was an outsized (and practically legal) risk to all the people driving, walking and biking in this dense area. At 40 miles per hour, someone hit will very likely die. At 25 miles per hour, someone hit will likely live. But more importantly, at 25 you are much more able to avoid collisions from happening at all.

In other words, there are two ways of measuring speed. A: The time it takes to get from one place to another (average speed) and B: The highest mark your speedometer reaches during your trip (top speed). This rule change will hardly affect A at all, but it could significantly reduce B. That’s a smart change.

The speed limit change will go before the City Council’s Transportation Committee September 20 before heading to the full Council for a vote “later this month,” according to the release. If it passes, the changes could start rolling out in November.

There will be a warning period right after the changes take effect before police start giving out citations (Is more enforcement a good idea? More on this in a follow-up post).

“Most people actually want to go the speed limit,” said SDOT Director Scott Kubly. So the biggest immediate benefit from this change will likely come from more people simply knowing about the speed limit changes.

The lower speed limits will also make it easier for the city to implement traffic calming improvements on more streets where speeding remains a problem.

Shout out to all the safe streets advocates, especially Gordon Padelford at Seattle Neighborhood Greenways, for the hard work to help build political support for this effort.

Mayor Ed Murray and Councilmembers Tim Burgess and Mike O’Brien today unveiled a proposal to enhance safety on Seattle’s streets by changing the speed limit on all residential streets from 25 to 20 MPH and streets in the center city from 30 to 25 MPH. The proposal is part of Seattle’s Vision Zero plan to end traffic deaths and serious injuries on city streets by 2030.

“Having helped pass the Neighborhood Safe Streets Bill during my time in the legislature, I’m proud that Seattle will be the first city in the state of Washington to implement lower speeds on all residential streets,” said Mayor Ed Murray. “When combined with other elements of our ongoing Vision Zero work, such as redesigned roadways and data driven enforcement, lower speed limits will help make Seattle’s roads safer for all.”

Speed contributes to 25 percent of collisions citywide and 42 percent of downtown traffic fatalities every year. It is the critical factor in survivability for a crash. Pedestrians struck by vehicles traveling at 25 MPH are half as likely to die as those struck at 30 MPH.

“Studies show that lowering speed limits is one of the best ways to improve safety in our neighborhoods,” said Councilmember Tim Burgess. “Reducing speeds will not only reduce accidents and fatalities but it also brings peace of mind for those who use our sidewalks, including children and our elderly neighbors. The reduction we are proposing will not restrict mobility.”

In residential areas, going down to 20 MPH brings the entire neighborhood to existing school zone speed limits, making safer routes of travel for all. Vehicle safety in Seattle has improved significantly, but not for people walking and biking. Pedestrian and bicycle collisions make up seven percent of total crashes, but nearly half of fatalities. The new speed limit will apply to 2,400 miles of non-arterial streets and help enhance safe routes to schools, transit, parks and other destinations.

“The proposal presents the opportunity that exists to balance the need for safe passage with thoughtful engineering,” said Councilmember Mike O’Brien. “Reducing speed limits has a direct impact on safety and helps the City implement better design standards that will allow drivers, bikers, pedestrians and parents alike to breathe a little easier as we head back to school by bus, bike or single passenger vehicle.”

Downtown there has been a 20 percent increase in speed-related fatal collisions over the last four years. Signal timing has already been adjusted to the new 25 MPH speed limit and drivers are moving more efficiently through the center city. A 25 MPH speed limit fits the typical operating speed of vehicles in the downtown core today.

This change would mainly impact the off-peak hours when there are more high-end speeders and more severe collisions.

“Speed is the critical factor in crashes, and lowering speeds is essential if we want to end traffic deaths and serious injuries on our streets,” said Seattle Department of Transportation Director Scott Kubly. “You can save a life for only an extra minute more per trip.”

This speed limit is consistent with the Washington State speed limit for city streets and Seattle is the only city in King County with an arterial speed limit over 25 MPH. Also, 25 MPH is the speed limit in the overwhelming majority of city centers nationwide including cities like New York, Portland, Phoenix, Denver and Houston.

The City Council’s Sustainability and Transportation Committee will discuss and vote on the proposal at its September 20 meeting. The legislation will then go before the full council for a vote later this month. If passed into law, the City expects to begin rolling out speed limit changes in November.

Founder and Editor of Seattle Bike Blog.
View all posts by Tom Fucoloro →
This entry was posted in news and tagged 20's plenty, gordon padelford, speed limits. Bookmark the permalink.