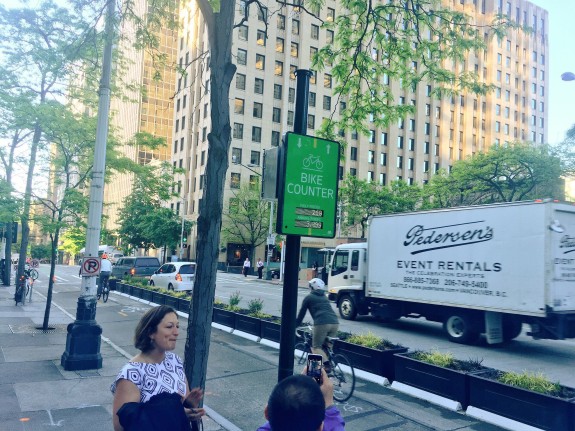 There’s now a humble counter ticking away everyone who bikes up or down 2nd Ave through the heart of downtown Seattle.

Commute Seattle’s Jessica Szelag unveiled the display this morning, which is a gift to the city on a beautiful first weekday morning commute of Bike Month.

Even with construction at 2nd and Pike blocking access to the 2nd Ave bike lane (the construction company’s own Bike Month gift to commuters), 212 people had biked past the counter before 8 a.m. Monday when the cover came off.

With the Viaduct closed, Bike Month is starting with even more reason to bike: Unpredictable traffic and buses. And since the Viaduct won’t reopen until the tunnel boring machine passes completely under the elevated highway and WSDOT deems it “safe,” well, it may be best to go ahead and get used to getting around without it.

The start of Bike Month is a sobering time, though, because it is also the anniversary of Lance David’s death. David, a husband and father of twins, collided with a truck at E Marginal Way and S Hanford Street May 1, 2013.

Friends visited the ghost bike memorial May 1 to freshen up its flowers and pay their respects. There are still serious road safety issues on E Marginal Way that the many West Seattle and South King County commuters have to navigate each day.