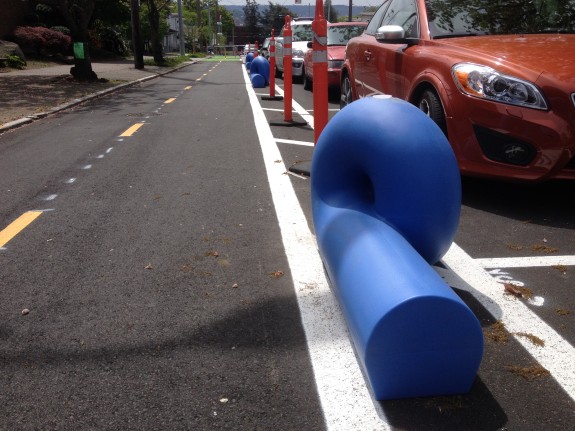 When the smurf turds were brand new. The orange posts were temporary and later removed.

After years of damage from parallel parkers and taggers, the blue sculptures that lined the Broadway Bikeway in Capitol Hill have been removed, Capitol Hill Seattle reports. They will remain in place on First Hill, at least for now.

I, for one, really liked the Broadway Bikeway’s smurf turds, a name they were given almost immediately after being installed. Or at least I liked that they were quirky and provided more of a barrier between the parking area and the bikeway than simple paint or a few plastic posts.

But the sand-filled plastic sculptures were simply no match for imperfect parallel parkers on Capitol Hill. Though they were heavy enough for a person to have trouble moving them, a person misjudging their parking attempt could easily nudge them into the bikeway or even crack them. This caused a significant maintenance problem because it was hard to move them back into place once pushed into the bikeway.

The city tried anchoring them with metal bands, but that only slowed the inevitable displacement and damage.

The lesson here isn’t so much about public art, but more about understanding and anticipating people’s parking abilities. Without a curb to give people feedback that they’ve gone too far, anything in the buffer space between the bikeway and parked cars will get hit over and over.

A work of public art by Claudia Fitch, the blue sculptures were supposed to serve the dual purpose of keeping cars out of the bikeway and representing the way the streetcar (and it’s overhead wire) is tying together the neighborhood. They go with the needle head structures at each station.

But as with any piece of public art, the public ends up defining it. And imagining a giant smurf walking around Capitol Hill and First Hill dropping perfectly uniform deuces next to the bikeway seemed to capture the public’s imagination more than the stitching theme. Which I think is great, even if unintentional.

As Ansel Herz at The Stranger reports, even Fitch wanted them removed after so much damage.

If there had been a curb or parking stops or anything tactile to help people park, the turds probably would have worked fine. But so goes art in the unforgiving parking lane: From smurfberries to smurf turds, smurf turds to smurf dust.