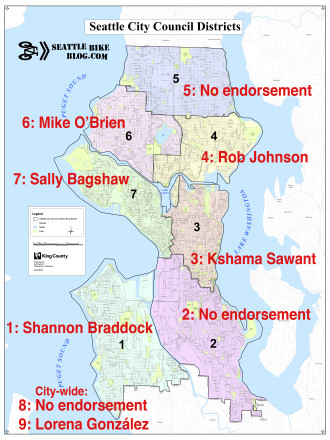 Before the City Council primary this year, we wrote:

the biggest mission for this primary should be to knock out the NIMBY candidates who fear change and want to put the brakes on our growing city and the multimodal streets we need to keep it moving. Only two people in each race will go on, and the best case would be for each race to have only genuinely good people running against each other to the November vote.

And for the most part, we did that. Good work, Seattle!

In case you still don’t know who to vote for, here are Seattle Bike Blog’s official endorsements for the Council races. Because I did not have the capacity to do full candidate interviews, I’m only endorsing in races where there is a clearly better choice for biking and safe streets. Endorsements are based on coverage in other media, endorsements from safe streets and trusted transportation organizations, and candidate questionnaire responses to Feet First, Seattle Neighborhood Greenways and Cascade Bicycle Club. You can read some other well-thought and relevant endorsement from like Seattle Subway, Seattle Transit Blog, Publicola and Seattlish.

While I personally know Bill Bradburd to get around by bike (and he has his own ideas for how Seattle can be more bikeable), he has not been supportive of city efforts to create safer streets and a connected network of bike routes. He is against Move Seattle and told Cascade he does not support Vision Zero: “Obviously eliminating serious injuries or fatalities is a laudable goal (if not a moral one), but I do not believe that at this point in Seattle (or human) history, it is paramount.” UPDATE 10/23: Bill called and was upset that I did not include the rest of his Vision Zero quote: “I believe that we need to be strategic and practical in order to achieve our greater societal ends (fixing transportation systems being one). And in my view, if we were to achieve Vision Zero by 2030 and the automobile continued to be our primary mode of transit, we will have failed.”

Lorena González, on the other hand, is totally on board. She has wrapped up essentially all endorsements from safe streets groups, and she described her stance on Vision Zero to the Urbanist this way:

González said there can be an “appreciable impact on preventing otherwise preventable deaths and serious injuries”. We need to aspire to the goal of Vision Zero. As an attorney, she represented people who were injured by negligent people on the road. But she recognized a limit to our ability to control other’s behavior. What the City can focus on is the design of roadways, bike infrastructure, and pedestrian infrastructure to increase safety.

Both incumbent Tim Burgess and challenger Jon Grant express support for funding and building the Bicycle Master Plan and working to reach Vision Zero. And neither candidate has made biking or safe streets a central part of their platforms.

Cascade Bicycle Club endorsed Tim Burgess basically because he doesn’t usually go out of his way to stop bike stuff. But that’s a pretty low bar. Seattle Transit Blog gives him a stronger push, saying Burgess “may be the purest urbanist of the 47 candidates this cycle.”

Jon Grant has a tenants rights background, and his focus is pretty strongly focused on affordable housing. He pushes hard from the renters’ side of the complicated rent stabilization vs free market development debate.

I know who I am going to vote for, but my choice is for reasons that have little to do with bikes. Or at least, I haven’t done the work necessary to connect the issues. My guess is that your mind will be be made up for reasons other than bicycling or safe streets, too. Maybe I’ll dive deeper into the intersections in the debate over rent control and the fight for safe streets in a future post. But for now: No endorsement.

Since joining the Council, Sally has become a leader for safe streets. Plus, her opponent Deborah Zech Artis’ transportation platform seemingly consists of blaming “bike lovers” for the city not building new streets (Where should we put those new streets? She doesn’t specify). This is an easy choice.

In our primary voters’ guide, we wrote simply that “Mike O’Brien is the shit.” Our opinion of the incumbent has not changed.

His opponent Catherine Weatbrook is not Mike O’Brien. That’s pretty much all you really need to know. But if you need more: She’s against 20 mph speed limits on residential streets, and she’s against completing the Ballard Missing Link.

Both Debora Juarez and Reverend Sandy Brown support the Move Seattle levy and express interest in building North Seattle’s missing sidewalks. In fact, sidewalks have become something of a major issue in this race, which is awesome.

Brown has taken a specific stance on how to fund the sidewalks: Creating a local improvement district. That’s a creative idea, but it’s hardly a sure thing. Juarez opposes Brown’s sidewalk-funding idea, telling Seattle Met she would rather fund sidewalks through the city budget and Move Seattle. Brown also wants city funding to help pay the sidewalk bill.

Juarez pleaded guilty to DUI in 2012 after crashing her car into a guardrail. She told the Times that she is sorry and has learned  from the experience: “I carry this wisdom with me every day.” People make mistakes, of course. And I believe in the importance of forgiveness. But DUI is a serious crime that can devastate communities. I can’t tell you how this information should sway your vote. I guess that’s a very personal choice you have to make yourself.

Publicola endorsed Brown. Seattle Transit Blog and Seattle Subway endorsed Juarez. Cascade Bicycle Club has not endorsed in this race (their candidate Halei Watkins got knocked out in the primary, their only candidate not to make it through).

Vote for Rob Johnson (even though we also heart Michael Maddux).

The District 4 primary worked out as well as it could have. Jean Godden finally got kicked off the Council after being mostly unimpressive on transportation issues, and noted bike lane hater Tony Provine lost by a lot (take note: Hating on bike safety is a terrible election strategy). I wrote in our primary voters guide: “I’d love to see a Maddux/Johnson race going into November.”

Well, that’s what we’ve got. Johnson, who comes from the Transportation Choices Coalition, is totally on board with bike transportation and knows the issues really well. He has been endorsed by both Cascade Bicycle Club and Seattle Transit Blog.

But Michael Maddux is also all about biking and transit, and he’s got a ton of energy. It’s really hard to not endorse this guy. But Johnson’s got so much steam and has already built so many relationships around the exact issues we write about, we just simply have to endorse him.

This is the kind of optimistic and powerful mindshift we need to make tough decisions on efficient, affordable and just transportation. And though Sawant does not put safe streets at the front of her platform, she has supported the cause every time it has come to a vote (though she fought and failed to shift much of the Move Seattle bill away from property taxes, she still voted to send the full-sized Move Seattle levy to voters).

Her opponent Pamela Banks has been very weak on safe streets and transit issues. This is a really poor stance to hold in any district, but it’s especially baffling in one of the walkiest, bikiest and transitiest parts of town.

“People aren’t going to catch transit to go to the theater and dinner—they just aren’t!” she told Erica C. Barnett. What?!?!?

She also told Barnett she doesn’t support a road diet on 23rd Ave in the Central District:

They didn’t ask us. They said, “it’s going to slow traffic, no one wants to get hit by a car,” and people in the neighborhood are like, “no one can get to us.”

This is not the kind of transportation thinking we need on the Council. Seattle Transit Blog switched their endorsement to Sawant ahead of the general election. Cascade Bicycle Club also switched their stance from “no endorsement” to Sawant.

Incumbent Bruce Harrell has collected most of the endorsements in this race, including from Cascade Bicycle Club, Seattle Transit Blog and Seattle Subway. And he has become a strong voice in support of a safer Rainier Ave, including the city’s recent safety redesign. When he gets behind a cause, he can make a lot happen.

But his record on safe streets and bike lanes has been shaky (he has pushed back on school zone speed cameras and on the cost of protected bike lanes). People can evolve, of course. Maybe he just changed his mind. Or maybe it’s an election year and he’s saying what we want to hear. I honestly can’t say.

His opponent Tammy Morales got the Stranger’s endorsement after the paper endorsed Harrell in the primary. She has voiced support for a safer Rainier Ave and Vision Zero, as well. And she told Cascade she thinks it was a mistake not to launch Pronto Cycle Share in Rainier Valley. She had this to say to Cascade about the state of transportation discourse in Seattle:

Public discourse in Seattle often pits drivers against cyclists and advocates picking one side or the other. Investments in bike infrastructure benefit both cyclists and drivers; they make cyclists safer while riding, and they help drivers acknowledge that a variety of vehicle types are sharing the road.

If Bruce Harrell’s current energy in support of safe streets stays as strong as it has been this campaign, we would love to have him on the Council. But we can’t say for certain it will, so we can’t endorse in this race.

Both Shannon Braddock and Lisa Herbold are quality candidates. As in other races, candidates who argued against safe bike routes got knocked out in the primary. Hating on bike safety is not a good political strategy even in West Seattle, where biking for transportation faces some serious geographic and connectivity challenges.

We waffled between endorsing Braddock or just not endorsing in this race, but we were ultimately swayed by strong endorsements and consensus from transportation news sites and organizations we trust. Seattle Subway, Seattle Transit Blog and Cascade Bicycle Club all endorsed Braddock as the candidate with the strongest handle on transportation policy. Then there was this solid wish list for bike-related improvements Braddock wants to see in and affecting District 1, as told to Cascade Bicycle Club:

If Braddock can make all that happen, she’d be one of the best members of the whole Council. Let’s see if she can.

And that’s it for our Seattle City Council endorsements. If you have anything to add or if you think we got a race wrong, let us know in the comments below.