Seattle will let neighborhoods design their own crosswalks 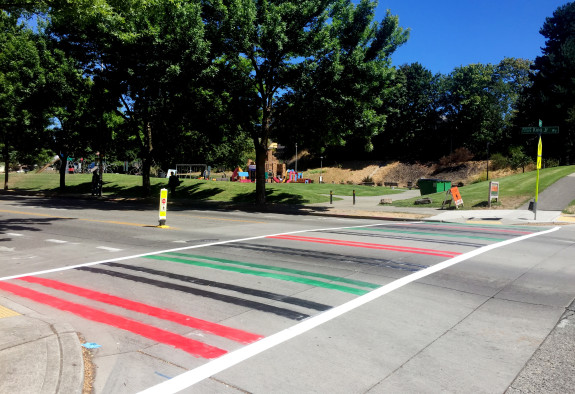 A Pan-African flag crosswalk on MLK near Powell Barnett Park

Remember when community members painted crosswalks in the Central District the colors of the Pan-African flag earlier this summer? We praised the city for making them official rather than trying to clean them off.

Well, now the city has gone one step further. Today, SDOT announced a new program to allow neighborhoods to officially implement custom crosswalks. It’s certainly a longer process than buying some paint and doing it yourself, but it will also last longer and the city will make sure it meets safety standards.

Of course, the crosswalk painters were not making a statement about the need for a community crosswalk program at SDOT/Department of Neighborhoods. In the words of the United Hood Movement: “We didn’t get $100,000 to do it. We just knew it would give people a sense ownership back to our community since gentrification has changed it so rapidly, and dramatically it’s hard to recognize the place we call… Home.”

But it is a cool side-effect of the action that now communities have this new option for creating public art or identity markings right in the middle of their streets. It will take some fundraising or winning a Neighborhood Matching Fund grant, but that’s a small price to pay for a community-building addition like this. Because the streets belong to everyone, and this is just one more way to say so.

Unless your neighborhood is zerbra-themed, in which case the current crosswalks work just fine.

The city is announcing the Community Crosswalks program, a new way for community members to acquire neighborhood oriented crosswalks.

SDOT and Seattle Department of Neighborhoods are jointly working on this program to allow interested community members to showcase their neighborhood’s unique culture and history or just liven up an intersection crosswalk with a colorful design. This is a great way for the city to celebrate our neighborhood communities in a creative and visual manner.

This is about celebrating and enhancing community identities,” said Mayor Ed Murray. “The iconic rainbow crosswalks on Capitol Hill started a broader conversation on how we can incorporate neighborhood character in the built environment across Seattle. I’m excited to see more history, culture, and community on display for residents and visitors to enjoy.”

Spurred by the popularity of Capitol Hill’s rainbow crosswalks, which were installed in June, residents can now use the existing Neighborhood Matching Fund to request such crosswalks. This will allow unique crosswalks to be approved and installed through an established process, ensuring that they are safe, reflective of community values and can be maintained.

To be eligible for an installation by SDOT, applicants will need to adhere to City guidelines for crosswalk locations and designs. Crosswalks must be sited where vehicles already stop for a traffic signal or stop sign, the design should consist only of horizontal or vertical bars, and the pavement underneath must be in good condition.

“We are pleased that other Seattle neighborhoods are being inspired by Capitol Hill’s rainbow crosswalks,” said SDOT Director Scott Kubly. “Through this joint SDOT/DON effort, we can transform other crossing points into tangible signs of community pride.”

Crosswalks typically cost about $25 per square foot, depending on the complexity of the design and installation, and can be expected to last approximately 3-5 years based on the amount of vehicular traffic at the location. More information about the program can be found here:  http://www.seattle.gov/neighborhoods/community-crosswalks. Crosswalks installed or modified outside of this process will be reviewed by SDOT and removed/repainted if determined to be unsafe.

The Neighborhood Matching Fund provides matching dollars for neighborhood improvement, organizing, or projects that are developed and implemented by community members. More information about the longstanding program can be found here:  http://www.seattle.gov/neighborhoods/neighborhood-matching-fund.

21 Responses to Seattle will let neighborhoods design their own crosswalks