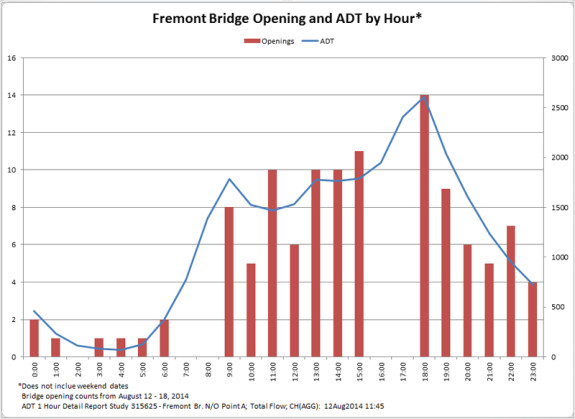 Photo by Taylor Kendall via Twitter. Used with permission

Getting stopped for a draw bridge is one of those truly Seattle experiences, especially for people on bikes. Three of the busiest bike route chokepoints in the city are bridges that open for maritime vessels: Fremont, University and Montlake Bridges.

Being on a bike lets you bypass the traffic backup and get up close to the action. Watching boats pass by is a chance to take a break and contemplate our beautiful city.

Which is all fun and games so long as you aren’t running late. Or getting soaked in the pouring rain.

And, of course, all the bus routes that use the draw bridges get thrown off-schedule and stuck in big traffic jams. And despite signs telling people to cut their engines, the number of idling cars waiting for bridges is awful for air quality and the environment. Thousands of people add minutes to their travel times, an effect that adds up fast during busy hours.

And those busy travel hours keep expanding as the city grows, bursting out of the two-hour windows during the morning and evening commutes when the city is not required to raise the bridges except for large commercial vessels.

So the city is conducting outreach now in an effort to change Coast Guard rules to limit the number of times draw bridges open for recreational water craft during busy travel hours. SDOT Director Scott Kubly told the Seattle Times that a schedule for “pleasure craft” openings could limit the number of openings.

“The pleasure craft, we want to have scheduled openings so people in their boats know when to show up, and motorists can plan accordingly,” he told the Times. 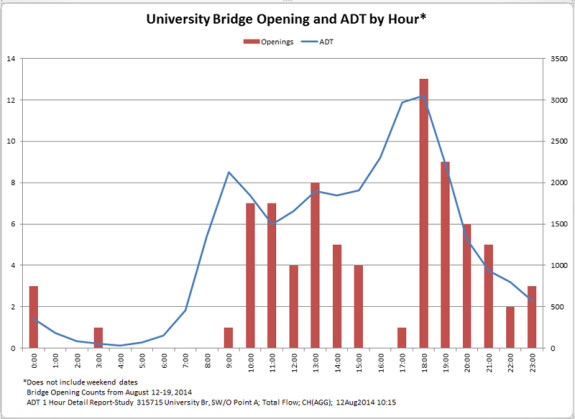 I suppose anyone wanting to watch the bridge open would also know when to show up. And perhaps buses could be scheduled to avoid openings, as well. Or maybe the bridge operators could even hold the bridges for buses. And bike travel times — which are already more predictable than driving or taking transit during busy hours — would be even more predictable.

A simple bridge rule change is also one of the most cost-efficient ways to significantly improve movement of people and goods around the city.

My main questions remaining are: Will the Coast Guard and laws governing waterways look kindly on the changes? And would scheduling bridge openings lose something inherently Seattle: Sometimes without warning, the city makes you stop, dismount and gaze out at the lake.

SDOT owns and operates three of the four bridges that span the Ship Canal – Ballard, Fremont, and University. (The Montlake Bridge is owned and operated by the Washington State Department of Transportation.)

The Ship Canal itself is defined by federal law as a navigable waterway, making each of these bridges subject to federal oversight. It is the US Coast Guard that many years ago gave SDOT (and WSDOT) the authority to limit the openings of these bridges on weekdays from 7-9 AM and 4-6 PM. (The exception is for large commercial vessels of 1,000 tons or more, for which the bridges must always open upon request, regardless of the time of day.)

While the number of bridge openings has remained fairly constant in recent years, the impact of the bridge openings themselves has grown. The morning and afternoon commutes have gotten longer, and traffic volumes have increased as Seattle’s population has grown.

With the average bridge opening lasting five minutes, literally hundreds of cars get backed up for each opening. The more cars, trucks, and buses backed up, the longer it takes for them to clear. Buses run behind schedule, emergency vehicles at times are delayed, commuters take longer to get to work and back home, and many of the delayed motorists leave their engines running, spewing polluting emissions into the atmosphere. 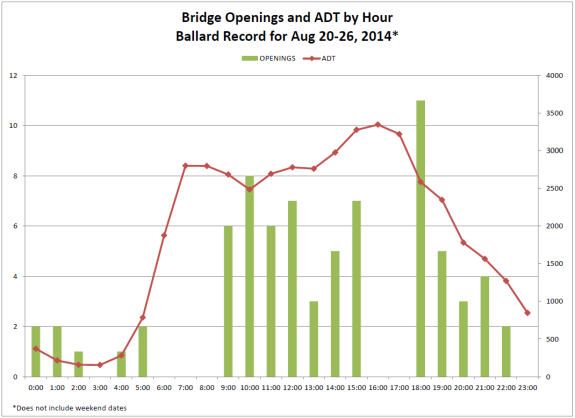 As you can see from the graph of openings at the Ballard Bridge for one week of last August, the number of bridge openings is greatest at the same time vehicular traffic is heaviest. For example, during the period from 6 to 7 PM, there were 11 weekday bridge openings that week, or an average of two each day. (Approximately 61% of Ballard Bridge openings in August, 2014 were for sailboats.) During that same one hour period each day, some 2,600 vehicles crossed the bridge. The end result is backups that often extend as far south as Dravus and as far north as 65th, delays that take considerable time to clear, sometimes clearing just as the next opening is requested.

In response, SDOT is seriously considering a petition to the Coast Guard seeking a change in restrictions on when these bridges must be opened upon demand. However, before doing so, SDOT is asking the public, both the maritime community (recreational and commercial) and the land-based stakeholders whether they believe additional restrictions are warranted, and if so, what might those restrictions be.

Should you wish to share your thoughts on these questions, you are asked to submit comments by Friday, September 25. You can submit your comments to [email protected], or mail them to: