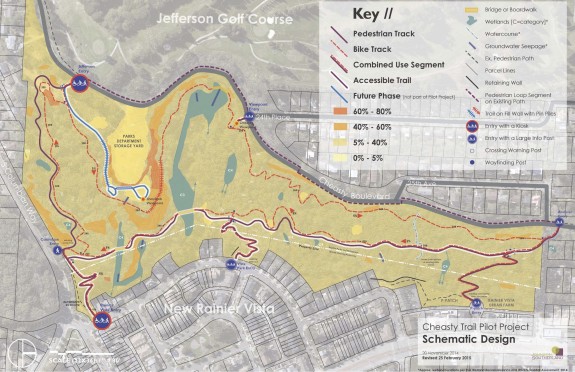 After a years long, sometimes heated public process, the Seattle Parks Board voted unanimously to move forward with a pilot set of soft surface biking and walking trails in the hilly Cheasty Greenspace natural area between Rainier Vista and Beacon Hill.

The Parks Board of Commissioners (a volunteer advisory board that the Parks Dept. takes very seriously) also gave a thumbs up to a second phase of the trails plan if environmental assessments of the first phase proves positive after 15 months.

This is not everything the Cheasty Trails advocates wanted, but represents a compromise that takes seriously neighbor concerns about disturbance to the natural area. Natural areas without lots of developed human access are rare within the Seattle city limits, and some people were concerned these trails would turn the area from a rare wildlife refuge into a packed and busy park.

But advocates in favor the trails point out that without proper access and trails built by professionals who know how to minimize environmental damage, people will — and have been — creating their own paths into the space. It’s in the middle of a dense urban area, and it’s not reasonable to expect people to stay out.

Plus, this is an area with very little access to forested parks, surrounded by residents with lower incomes and, therefore, less ability to escape the city to get to forest areas around the region. Kids love mountain and dirt biking, but many kids in the area can’t easily get out to popular mountain bike parks in the suburbs. This project hopes to bring that experience within reach of home, and Bike Works has expressed excitement about the opportunities it will provide for after school and summer camp programming.

Approval of the trails also activates volunteer power eager to do habitat restoration work in the park overrun by invasive plants.

The debate over the trails project raised some hard questions about who the trail is for. Is this just a playground for the often white and wealthier people who already enjoy mountain biking, or is this about bringing the joys of mountain biking and forest hiking to people who might not typically have access? Let’s make sure it’s the latter. Because urban natural space is special, and it should be a draw that brings communities together.

More details on the decision from Seattle Parks:

Seattle Parks and Recreation is moving forward with a plan to design and build the Cheasty Mountain Bike and Pedestrian Trail Pilot Project in the Cheasty Greenspace in southeast Seattle.

Last Thursday, May 28, the Seattle Park Board of Commissioners voted to move forward with the proposed trail project.

In addition, the Board voted unanimously to support the proposed designs for the trail. The Board also approved the Phase II addition of a cross trail to create a safe walking route from Rainier Vista to North Beacon Hill and “skills trails” on the south side of the proposed project area. Phase II will occur if the 15-month pilot project is successful and the environmental evaluation studies are favorable.

“This is an exciting opportunity to bring positive activation to a greenspace that has been plagued with dumping, encampments and illicit behavior,” said Christopher Williams, Acting Superintendent for Seattle Parks and Recreation. “We will be creating an accessible urban public space that can be enjoyed by the rapidly growing population of families in the surrounding neighborhoods, many of whom do not have access to the wilderness outside of their community. We are looking forward to the community spending time recreating and exploring in this wonderful space.”

The Greenspace is a 38-acre park on the east slope of Beacon Hill between Cheasty Boulevard and Martin Luther King Jr. Way S in southeast Seattle.

Acting Superintendent Williams will forward a recommendation to the City Council soon, as directed by Ordinance No. 124546.

The project will provide a soft surface mountain bike trail in the Greenspace. The goal is to provide a mountain bike experience for users of all ages and abilities in conjunction with ongoing and future forest restoration.

The Board of Park Commissioners discussed and deliberated on the Friends of Cheasty Greenspace at Mountain View’s mountain bike/pedestrian trail proposal at public meetings in November 2013 and January 2014. The recommendation to the Parks Superintendent was that Seattle Parks should initiate a pilot project to allow mountain bike trails to be built in the Cheasty Greenspace, in conjunction with restoration and foot trails. Seattle Parks and Recreation worked with community stakeholders during a five-month public Project Advisory Team process for the trail project.