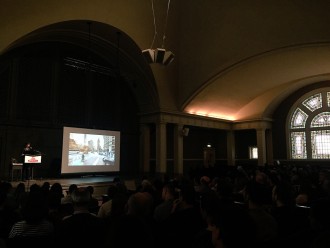 Janette Sadik-Khan spoke at Town Hall recently as part of the city’s recent transportation speaker series, which seems to be part of a campaign to get people familiar with and excited about bold safety, creative and multimodal efforts to transform city streets. No coincidence, I’m sure, that this speaker series kicks off efforts to get people excited about the Move Seattle transportation levy.

Sadik-Khan is the most influential US city transportation director working in recent years. By taking bold and fast action in the country’s most congested streets, her work in New York City proved to every other city that projects like public plazas and protected bike lanes can and will work. After all, if NYC can build a protected bike lane through Manhattan, you can definitely build one in Denver or Houston or Seattle.

Her talk was really good, and I highly recommend giving it a watch. The talk is about 40 minutes long, followed by a panel chat and Q&A with Mayor Ed Murray and SDOT Director Scott Kubly.

She had a great way of framing the problem with the way American cities have designed their streets in the past generation or two, where the movement of cars is a higher priority than people walking or biking or taking transit.

“It’s like Venice with traffic sewers instead of canals,” she said.

If you rethink the value of street space with a multimodal mindset, you can make streets that are safer and work better for everyone.

“You can have walking biking and transit work together if you don’t have them fighting over the scraps,” she said.

But more than just words, she helped lead the way to creating a new philosophy on how cities can move quickly to make bold changes by using low-cost materials to demonstrate concepts. That way, you can modify designs to adjust to unexpected challenges and people’s feedback before investing in a permanent solution.

“We used paint and planters to change our streets in real time.”

Sadik-Khan was also in charge when CitiBike launched, which is by far the most-used bike share system in the nation. In fact, Kubly pointed out that many days, more people use CitiBike than ride our LINK light rail. Of course NYC operates on a completely different scale than Seattle, but that’s still pretty impressive.

“How many of you use the Pronto system?” she asked. Some hands went up. “How many of you want the Pronto system to be bigger?” Lots of hands went up. This echoes advice Gabe Klein, who led Chicago’s DOT when they launched the Divvy bike share system, gave during his talk a few weeks ago. Bike share systems need to be bigger and denser to really take off.

“I really don’t think that cities should put a cap on their potential, Styrofoam cap or otherwise,” she quipped. After all, she noted, there has yet to be a single death on a US bike share bike, which is a remarkable safety record. Seattle is the only major city with a bike share system and an all-ages helmet law.

Below is the video, posted by Seattle Channel. I would love to hear your thoughts on her talk in the comments below.

This entry was posted in news and tagged janette sadik-khan, where are we going. Bookmark the permalink.