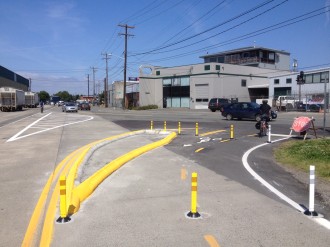 Temporary safety changes announced in 2012 have been implemented slowly

In late 2012, Councilmember Tom Rasmussen and then-Mayor Mike McGinn held a press conference under the Ballard Bridge to announce a series of temporary safety improvements to the dangerous streets connecting the two severed ends of the Burke-Gilman Trail. Some of those changes have been implemented, and some were improved (they built a two-way bikeway rather than planned “advisory” bike lanes, which would have directed people on bikes close to the road edges).

The city is just now getting started on shoulder paving work they announced during that 2012 press event. Work is scheduled to begin April 28 and will go through May 6. If you bike this route, be prepared for delays or to take a different route.

SDOT crews plan to work on Shilshole Avenue Northwest between 17th Avenue Northwest and Northwest Market Street and from April 30 to May 6. On-street parking on the south side of Shilshole will be restricted while the crews replace the road edge. The street will remain open to traffic, but flaggers and Police Officers will assist southbound traffic, pedestrians and bicyclists through the work area.

Work hours will be 8 a.m. to 5 p.m. Motorists and bicyclists are advised to expect delays or use alternate routes.

The shoulders on Shilshole are particularly dangerous because the roadway lanes are raised just enough in places to create a dangerous lip that can send people biking plummeting to the ground. I know this first hand because I watched it happen to a stranger biking in front of me a couple years ago. Luckily, there were nobody was trying to drive past us at the time, so the guy got up and biked away with only scratches and bruises. He said he biked this route all the time, and must have just somehow misjudged the shoulder lip this one time. Ever since then, I stay off the shoulder entirely.

The shoulder paving project won’t fix the Missing Link, though it should help ease yet one more hazard. But from wheel-grabbing train tracks to poor sight lines to oblivious people driving across the temporary bike route, the many problems will continue to injure people until the trail connection is finally completed.

Cascade Bicycle Club’s Connect Ballard team reports that the timeline for the Environmental Impact Statement (also announced at that same 2012 press conference) is currently on track for a draft to come out in late 2015 or early 2016 (one of the group’s goals is to expedite this process). Three years just to produce another study of 1.5 miles of trail that has already been delayed 12 years. I dare you to find a worse example of the so-called Seattle Process.

Meanwhile, a Missing Link near-miss video blew up on Reddit the other day. The original poster emailed Seattle Bike Blog to offer the video and say what he hopes comes from all the attention it has been getting:

If this video is useful to your blog, I give you permission to use this video in any manner you choose as long as it is not a witch hunt on the driver. My bigger issue is whether or not this turn should even be possible from an infrastructure/safety point of view.

People driving through the bridge supports to go down a bumpy alleyway is a whole new way to get hurt while biking on the Missing Link and yet another hazard to look out for. Perhaps this happens now because the street is one-way for people driving. I don’t see any reason why the city can’t make some design changes to prevent this from happening again.

Oddly enough, another Reddit user was biking the opposite direction and also had a helmet cam (what are the odds?):

Founder and Editor of Seattle Bike Blog.
View all posts by Tom Fucoloro →
This entry was posted in news and tagged ballard, missing link, shilshole. Bookmark the permalink.