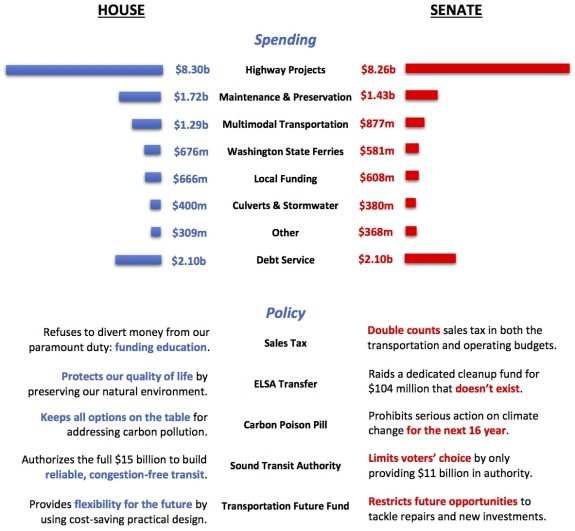 Image from the House Democrats (thus the politicized slant)

The WA legislature is getting closer to a possible deal on transportation funding, paid for in large part through a raise in the gas tax and raises in various weight fees.

As with state spending for the past generation, the vast majority of spending in both the House and Senate bills will be on highways, including new and expanded roads. In fact, from a high level, the two versions of the bill really aren’t very different, House leaders noted to the Seattle Times last week. This includes the remaining $1.5 billion needed to connect the 520 Bridge to Seattle, as well as widening I-405 and extending Highway 167 in the Tacoma area (the Urbanist doesn’t even see much time gain from this project).

But it’s a bipartisan state transportation package, and everyone is going to need to do a lot of nose holding if this thing is going to pass. I am not here to convince you that all this highway expansion money is OK. Instead, I’m going to focus on the biking and walking investments that have so far made it into the bill. Because there is some good stuff buried under all those highways.

To put the current House version into perspective, planned spending on the Bike/Ped Grant Program ($75M), Bike/Ped Projects ($100M) and Safe Routes to Schools Grant Program ($56M) combine to make up just 1.5 percent of the $15 billion package. Add the Complete Streets Grant Program ($160M) and you’re up to 2.6 percent. And while that might seem small, it’s a bigger piece of the state funding pie than usual.

And in coming years, more and more applications will come in from places big and small who could use some help from the state making the streets near their schools safer. The state should be looking to boost their funding even further, which would be a great way to engage communities all across the state on taking action to make their streets safer for people of all ages and abilities.

After all, the state’s Target Zero traffic safety plan notes that declines in injuries and deaths in recent decades have largely left out people who walk or bike. With a Safe Routes to School grant, local communities partner with the state to solve this problem together. That’s exactly what we need, and a program worthy of as much investment as we can muster. Plus, compared to the cost of just one new or expanded highway, community safety projects are such an incredible value.

The transportation bill also calls out a bunch of projects specifically. While there are more projects that will affect biking and walking, here’s a look at a few you all might find particularly interesting (UPDATED, click to see more bike/walk projects and transit projects).

The House version also takes out the ridiculous “poison pill” in the Senate version that would revert all mulitmodal funds to highway spending if the state enacts clean fuel standards Governor Jay Inslee has been pushing (though those standards are not included in either version of the bill). The House also includes full authority Sound Transit needs to put a ballot measure in front of regional voters in 2016.

This is a 16-year funding package, and there is still a lot of work to do to get the bill through the House and to mesh the two versions together into a compromise bill.

WA Bikes urges support of the House version, but wants you all to write your representatives to urge further investments in walking, biking and Safe Routes to School. Here’s the default text of a letter you can send via the WA Bikes website:

I support the foundation established by the House proposal for a walking and biking project list of $100 million, and additive investments of $56 million and $75 million for the Safe Routes to School and Bicycle Pedestrian Grant Programs, respectively.

And while I appreciate this step to invest in safety and community priorities, your work is not over. The House and Senate negotiations should aim to increase the Safe Routes to School investments. Currently only 1 in 4 projects are getting funded. With a modest increase from the most recent transportation proposal, we can enable more locally driven school safety projects to reach completion.

I am part of the 84 percent of Washington voters who believe that funding for Safe Routes to School projects should be prioritized in the state transportation budget. I urge you to join me in supporting safer ways for our children to get to school.

Thank you for working to prioritize funding for biking and walking safety so we can build communities that are safe for Washingtonians of every age to get out and get active.

Dear friends and supporters of the Burke-Gilman Trail,

I’m excited to share that the Washington House Transportation Committee has included $16 million in funding for the University of Washington’s planned improvements to the Burke-Gilman Trail in its proposed transportation package. Combined with existing funds from UW Transportation Services and support from the Puget Sound Regional Council, this amount would complete funding for the Burke-Gilman Multimodal Connector, ensuring that the state’s busiest bicycle and pedestrian corridor will be ready to support the 150 percent increase in trail traffic projected by 2030, starting with the opening of Link Light Rail at Husky Stadium next year.

Preserving this funding will still require action by both the House and Senate, but this action by House Transportation Committee Chair Judy Clibborn, Vice Chair and project champion Jessyn Farrell and the rest of the committee gives our plan to expand this critical piece of our regional transportation infrastructure a credible path forward.

What do you all think? Does the legislature have the nuts and bolts of a good compromise here? Any major bike pieces we missed? Let us know in the comments below. If you’re interested, you can dig deeper into the specifics using this somewhat confusing state website.