This has got to be a Seattle Bike Blog record: Four posts in a row about West Seattle!

The city is hosting an open house tomorrow (Thursday) about planned safety changes to SW Roxbury Street, which forms the border between Seattle and White Center. The open house goes from 3 to 4:30 p.m. at the Southwest Branch Library.

The city has been studying the street for a while and — in consultation with King County, which governs White Center — has come up with a list of short-term safety changes for the street. These changes will be implemented this summer.

Unfortunately, the roadway conditions are too damaged to add bike lanes, planners say, though they intend to do so when the road is repaved. The city does not yet have a clear plan or timeline for repaving. The Bicycle Master Plan calls for protected bike lanes from 35th Ave SW to at least 8th Ave SW.

But there are a lot of lower cost changes the city can make right now to improve safety for everyone. Speeding is extremely high, and the odds of a serious injury in a collision is off the charts. People are injured in 50 percent of collisions on Roxbury, nearly twice the rate as the city average. From an SDOT presentation: 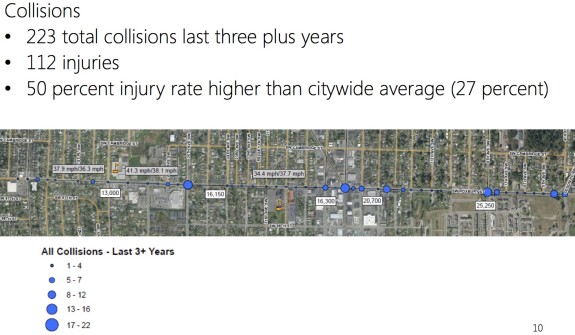 In just three years, people driving have hit 11 people on foot and two people on bikes. Several of the people hit while walking were hit near the White Center business district clustered around 16th Ave SW.

In some sections of Roxbury, speeding is so out of control that most people speed and 15 percent of people drive faster than 41 mph. That’s more than 11 mph over the speed limit. At 40 mph, the odds of survival for someone struck while walking are about ten percent and only get worse with every extra mph. At 30 mph, odds of survival are about 50 percent, and the odds of a collision happening at all plummets. 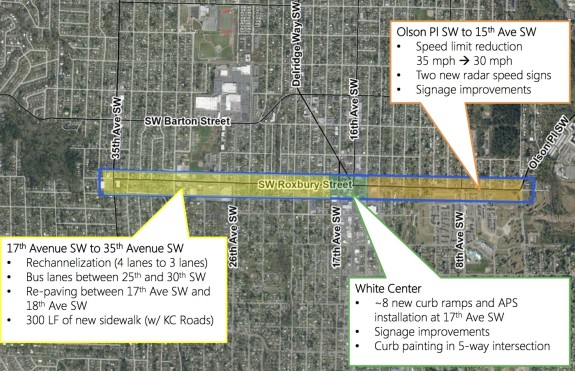 In essence, the city has divided the project into three sections. Between 35th and 17th Avenues SW, the road will get a standard safe streets redesign from four lanes to three including a new center turn lane. Traffic volumes are low, which is one reason why speeding is so rampant. Aside from slowing speeders, a new left turn lane will make turning movements safer and easier. It will also be a lot safer and easier to cross the street on foot or bike.

Traffic volumes climb east of 17th and the White Center business district. Between 18th and 15th, planners will make some walking safety changes, including better walk signal timing and some new curb ramps. However, the core road design issues will not be changed east of 17th due to the higher traffic volumes, according to a project fact sheet:

SDOT’s studied the possibility of extending the rechannelization along the entire length of the corridor; however, our analysis showed that the eastern part of roadway performed poorly under this condition. Traffic volumes increase significantly east of White Center. More than 25,000 vehicles use Roxbury each day on the eastern segment of the corridor.

This is a rather concerning line from the city, which claims over and over that safety is its top transportation priority. This reasoning suggests that fast traffic flow is the city’s actual higher priority on Roxbury east of 17th.

The city has been great at making safety changes to streets where those changes won’t actually affect traffic flow. And sure, it probably makes sense to go after the easier (though not exactly easy) wins first. Seattle has no shortage of low or medium traffic streets with too many lanes that are too wide. The success of safe streets projects on streets with traffic volumes below 25,000 has been remarkable by every possible measure: 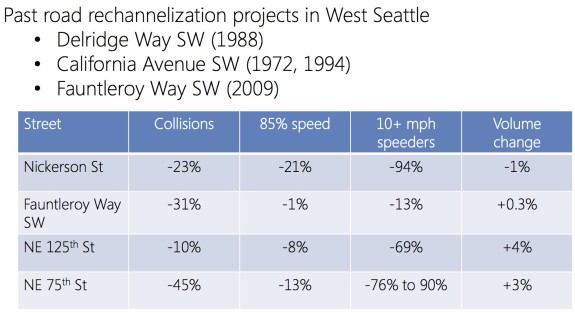 But at some point, we’re going to need to make streets like the east segment of Roxbury safe, too. And NE 45th Street in the U District. And Market St in Ballard. And Rainier Ave north of Columbia City. And Northgate Way (and on and on…). Some signage improvements alone are not going to get us to Vision Zero.

This week West Seattle residents have another opportunity to discuss plans to improve safety for everyone using Southwest Roxbury Street.

Last week the Seattle Department of Transportation’s project manager provided a presentation and discussion of the roadway safety plans at the Westwood/Roxhill/Arbor Heights Neighborhood Council. Tomorrow, the project manager will be at the Southwest Seattle Public Library to provide another opportunity to drop in and learn what is planned.

Look for additional opportunities for community input in May. SDOT will host a walking tour of Roxbury Street on the evening of Wednesday, May 20.The project manager will review traffic data and lead a walk to the areas where improvements are planned. A walking tour will also be held for another local street, 35th Avenue Southwest, on Saturday May 16, from 9 a.m. to noon. Watch for more information about the walking tours in the following weeks.