I’m not a cyclist. Supporting safer streets is obvious once you ditch vehicle language 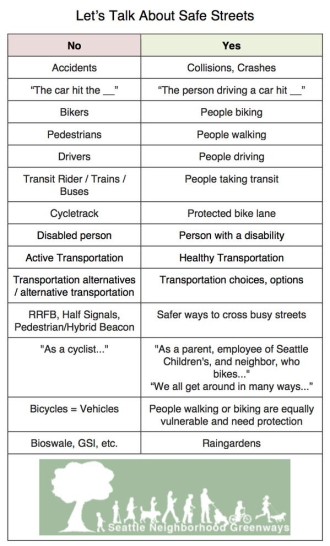 Seattle’s safe streets leaders are making headlines around the nation (and even a few overseas) for a deceivingly simple strategy to help keep a public conversation about transportation focused on safety: Choose your words wisely.

PeopleForBikes published a blog post last week highlighting a Seattle Neighborhood Greenways cheat sheet to help people avoid common language pitfalls that often derail conversations about safe streets. In essence, rather than talking about streets as a place where various modes jockey for space, SNG’s guide assumes streets are places for people to get around safely no matter which mode (or modes) they choose. The post has pretty much blown up in bicycling and safe streets circles, such as Streetsblog USA and the UK’s road.cc.

Readers of this blog probably recognize a lot of this language because Seattle Bike Blog has long tried to avoid dehumanizing, wonky and car-centric language (Michael Andersen of PeopleForBikes also interviewed me for the post). I in large part learned it from Bike Portland, a 2013 survey by Cascade Bicycle Club and other people around the world writing about safe streets. It can be a little awkward at first (“driver” is shorter than “person driving”), but it also forces you to rethink statements that unintentionally leave the people out of the conversation.

At least in America, most people grow up using language that swallows some very destructive and dangerous assumptions. Using words like “driver,” “cyclist” or “pedestrian” turns people into vehicles navigating a traffic system. This deceptively subtle shift can have enormous impacts on everything from the way we treat other people on our streets to the transportation budget options our elected officials prioritize.

By conflating a person’s chosen transportation mode at a particular moment with their personal identity, it becomes shockingly easy think about people as members of warring tribes in conflict, battling for space (cue car horn honking and “cyclist” flipping the bird). The idea of a “war on cars” suddenly makes sense to a lot of people because they see their car lanes being turned into bike lanes for others. The safety and comfort of real living and breathing and loving people getting around on foot and bike has been dropped from the conversation.

But if you think of everyone on the street as a person, discussions go in a very different direction. Because we all want our friends, neighbors, co-workers and family members to get around town safely whether they choose to drive, bike or walk. I don’t love my mom any less when she’s driving than when she’s walking.

Traffic violence is no ‘accident’

The all-time best example of dangerous car culture language is the gross misuse of the word “accident” to describe every collision involving a car, whether we know the details or not. The most obvious problem is that not all collisions are accidents, so it’s simply inaccurate. Many are potentially crimes, like DUI, vehicular assault, vehicular homicide, hit and run, etc. This should be reason enough to spur news rooms and government communications offices to update their style guides to avoid the term (many Seattle media folks have done this in recent years).

But worse, the word “accident” implies that the collision was unavoidable. As former Seattle-King County Public Health Director Dr. David Fleming said when helping to craft Seattle’s 2012 Road Safety Action Plan, traffic collisions are one of the biggest preventable causes of death and injury. We know how to prevent collisions and the public health harm they cause through better road design, enforcement and education. Failure to take such actions is no accident. Here’s how the Action Plan explained it (emphasis mine):

No matter how you choose to travel in Seattle, you should feel safe on our streets. Sharing the streets is about more than just following the rules. It requires us to realize that the person in a car, on a bike, or on foot is another human being too, someone who is just trying to get where they’re going safely. The people we pass in our travels are our friends, our neighbors, our family, our co-workers. Far too often, collisions change the lives of these people who share our city, or even cut their lives short. Research shows that the majority of these incidents are preventable. A culture of empathy for each other is the missing ingredient in reducing fatalities and improving safety on our roads.

We tried over the better part of the last century to engineer our cities for vehicles, and it has proven unrealistic at best and deadly at worst. It’s time we designed them for people instead.

This can all seem like nitpicky word-policing, and sometimes it is. But it is vital that we drop the dangerous windshield perspective when making transportation decisions or when speaking to other members of our communities if we are ever going to truly dedicate ourselves to eradicating traffic violence.

Founder and Editor of Seattle Bike Blog.
View all posts by Tom Fucoloro →
This entry was posted in news and tagged michael andersen, peopleforbikes, seattle neighborhood greenways. Bookmark the permalink.

18 Responses to I’m not a cyclist. Supporting safer streets is obvious once you ditch vehicle language