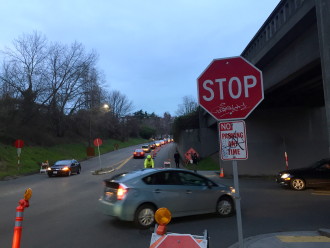 Almost immediately after the Seattle City Light Burke-Gilman Trail detour was put in place, readers started reporting confusion and concerns. Mostly, people were concerned about a multi-direction stop at 6th Ave NE where sightlines are limited.

City Light has since added some extra wayfinding signage to help people figure out the routing, but the 6th Ave NE intersection remains a bit stressful. This is especially problematic for the sometimes younger and/or less experienced users the trail attracts.

Work on the trail is scheduled to continue through mid-February, so trail users will need to get used to the detour. City Light released the following video explaining how the detour is supposed to work: 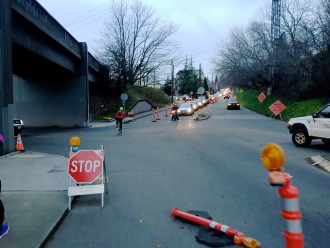 It can be difficult for trail users and cars stopped under the bridge at 6th Ave NE to see each other.

As we reported previously, the original plan did not include a trail detour at all, and would have sent trail users into shared traffic lanes on the street. So the temporary trail is an improvement over that plan. There could be some ways to adjust stop lines at 6th Ave NE to improve sight lines, but users should definitely be prepared to be patient and proceed with caution.

Below is the detour map. What has your experience been with the detour? 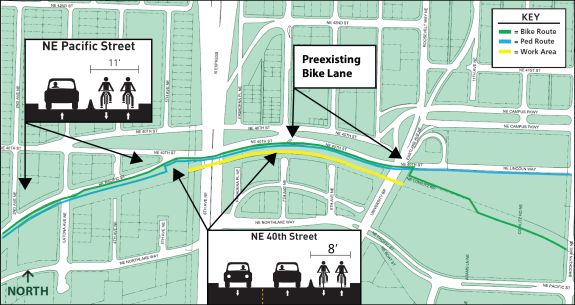 This entry was posted in news and tagged burke-gilman trail, seattle city light. Bookmark the permalink.