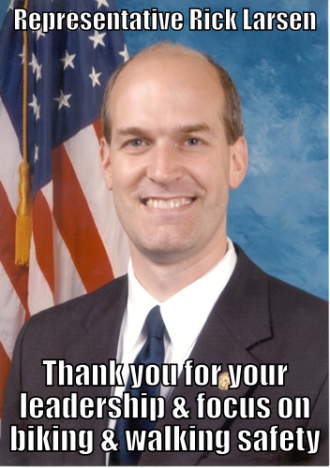 US Representative Rick Larsen has teamed up with two other members of the US House to look into whether American conventional road engineering standards are putting people who bike and walk at disproportionate risk (spoiler: Yes).

Specifically, Larsen (WA-2, much of western Snohomish and Skagit Counties as well as Island and San Juan County), Peter DeFazio (OR-4) and Eleanor Holmes Norton (DC) sent a letter to the Government Accountability Office requesting a report on how many engineering encourage speeding:

Furthermore, we are concerned that conventional engineering practices have encouraged engineers to design roads at 5-15 miles per hour faster than the posted speed for the street. This typically means roads are designed and built with wider, straighter lanes and have fewer objects near the edges, more turn lanes, and wider turning radii at intersections. While these practices improve driving safety, a suspected unintended consequence is that drivers travel faster when they feel safer. Greater speeds can increase the frequency and severity of crashes with pedestrians and cyclists who are moving at much slower speeds and have much less protection than a motorized vehicle affords.

The requested study should “investigate the trends and causes of these roadway fatalities and the challenges associated with improving pedestrian and cyclist safety. In particular, we are interested in information about the relationship between vehicle speed and roadway fatalities, and how roadway design speeds and other common practices may exacerbate this problem,” according to the letter.

With more and more communities around the nation looking beyond often problematic conventional design guides and toward design guides like NACTO that focus on complete streets, this study could help inform USDOT’s renewed interest in biking and walking safety.

“Because of the great advocacy in cities like Bellingham, Mount Vernon and Anacortes, it makes total sense that Representative Larsen would lead on walking and biking safety,” said Blake Trask of Washington Bikes.

This is the second time this week that a legislator from Washington State has made an impact on biking and walking safety at the national level. As we reported previously, Senator Patty Murray added a non-motorized safety performance measure to the Federal budget.