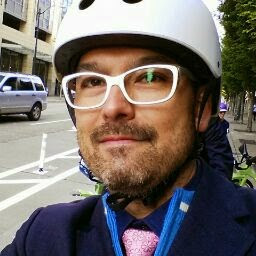 Paulo Nunes-Ueno was Director of Transportation and Sustainability at Seattle Children’s when the institution wanted to expand its northeast Seattle campus. To help mitigate the traffic impact the larger campus would have on the neighborhood, Nunes-Ueno lead a cutting edge effort to help connect the campus to the nearby neighborhood, transit service and the Burke-Gilman Trail. At the same time, he put his own home life into public view to make a point about making neighborhood streets fun and active for people of all ages.

Now, the city has announced that he will lead the new transit division at SDOT, which will immediately be tasked with helping to figure out how best to use funds raised by passage of Seattle’s Prop 1 in November.

Nunes-Ueno showed clear and convincing leadership in northeast Seattle while at Seattle Children’s, helping to lead efforts to build one of the city’s first neighborhood greenways on 39th Ave NE. That greenway was just part of a $2 million investment the institution made in biking and walking infrastructure in the area (a new connection to the Burke-Gilman was another).

Seattle Children’s also invested a half million dollars to help Pronto Cycle Share provide a helmet solution to comply with the county’s all-ages helmet law, which also helped them secure a station at their campus even though it is outside the service area. 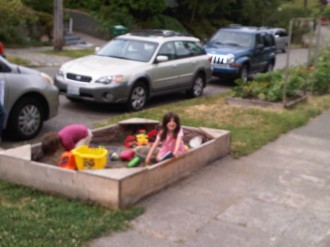 But of all this awesome safe street stuff, one of my favorite things Nunes-Ueno has done in recent years was to fight to defend a planting strip sand box he built for his kids in front of his house that quickly became something of a neighborhood meeting place. When met with threats of a $500/day fine for having a play structure too close to the street, Nunes-Ueno argued that the city should change the rule because “we should be encouraging neighbors to get together and children to play outside.”

How cool is that?

I can’t wait to see how the face of transit shifts in Seattle with someone who takes safe and active streets so seriously in this new position. Because safe streets and efficient transit are the way of the future, and neither can work without the other.

More on the hire from the city’s press release:

“Especially with the recent passage by Seattle voters of Proposition 1, the City must effectively manage its growing investment in transit,” said Mayor Murray. “With his transportation vision and background, Mr. Nunes-Ueno will help ensure we deliver on our commitments to improve transit citywide.”

In this new position, Nunes-Ueno will lead a team of transportation professionals focused on delivering safe, efficient and cost-effective transit solutions for Seattle. This division will be responsible for four main areas: transit policy, planning and procurement; transit design and construction oversight; transit operations and interagency coordination; and mobility options and parking programs that support transit. Nunes-Ueno will also provide subject matter expertise to SDOT leadership, the Mayor’s Office, the City Council and other City departments.

“Making transit better helps everyone who lives in, works in or visits Seattle,” said SDOT Director Kubly. “With the creation of a new Transit division and the hiring of Paulo Nunes-Ueno, we will have the right team in place to guide our short- and long-term transit efforts. He is a strong hire due to his success at Children’s Hospital, where his transit and commute trip reduction work resulted in sixty percent of employees walking, biking or taking transit.”

Nunes-Ueno joins SDOT after having served as the director of Transportation and Sustainability for Seattle Children’s Hospital, and manager of King County Metro’s Commute Trip Reduction Services Project/Program. He will start at the City on December 17.