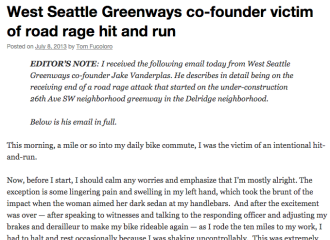 In July 2013, Seattle Bike Blog published a troubling email we received from dedicated West Seattle Greenways leader Jake Vanderplas, who was the victim of an intentional assault when a road raging person yelled at him from her car, then swerved and hit him in the bike lane on SW Andover Street in North Delridge.

Erika Soerensen, then 37, has been found guilty of second degree assault in King County Superior Court, West Seattle Blog reports. That is a serious criminal charge that acknowledges that Soerensen used her car as a weapon.

Several witnesses watched Soerensen rage for blocks at Vanderplas on the then-brand-new 26th Ave SW neighborhood greenway, which ironically Vanderplas helped advocate for through his work with West Seattle Greenways. She passed him closely at high speed and yelled at him through her window before she finally assaulted him physically, they told police.

Luckily, Vanderplas was not seriously injured, though his left hand was hurt. Soerensen fled the scene, but was found six days later.