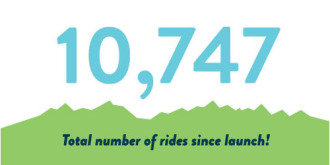 Pronto Cycle Share is a month old, and I already can’t imagine Seattle without it.

In just the first month, 1,760 annual members, 1,856 24-hour pass holders and 156 three-day pass holders used the system to make 10,747 trips and travel 22,663 miles on the bike share system. And as Pronto noted in a blog post, that was during the fifth-wettest October ever recorded.

That means Pronto users have already biked the distance from Seattle to New York. Eight times. It’s also just 2,200 miles shy of a trip around the equator (hey, that’s a good goal for November!).

So use is pretty strong (though not overwhelming) despite worries that the all ages helmet law in Seattle and King County would sink the bike share system.

The most active stations so far are:

But this success is propped up at a cost, and the path forward for the helmet solution is far from clear. Alta Bicycle Share, which operates Pronto, was unable to deliver the planned helmet vending machines in time due to manufacturer delays. So in order to stay one target with the launch, Alta has packed unlocked bins next to bike share stations with clean helmets, and asks users to borrow one for free and return them on the honor system. They also sent coupons to every annual member offering a free Pronto helmet, which can be picked up from a short list of retailers (so if you see someone wearing a Pronto helmet while riding their own bike, it might not actually be stolen).

Perhaps it is no surprise, then, that helmets were getting stolen like crazy in the first couple weeks. 30 percent were stolen in the first week alone. But as time goes on, the helmets are disappearing less and less. The weekly loss rate is now down to 15 percent, according to Pronto Executive Director Holly Houser.

This could be because many people without a helmet who saw the bins as their chance at a free one have already taken one. It could also be that a lot of members who received the coupon for a free helmet simply took one from the bin rather than go to a retail outlet. The next month or two will give a better idea of what the ongoing helmet theft rate will look like.

And the results could impact the way forward for a helmet solution. If the theft rate is low enough, maybe buying pricey and largely untested vending machines is not the most cost-effective way to provide helmets. While the vending machine is still “a plausible solution,” Houser said they are also looking for options that might be “cheaper and more efficient.”

So how about bike thefts?

Well, there has been one apparent attempt to steal a Pronto bike, but it didn’t get very far. Houser said someone noticed a Pronto bike that had been “artistically decorated” and repainted hanging out at 3rd and Pike. Pronto staff were able to swing by in the van and recover it, but it may have been damaged beyond repair.

She stressed that it is important for all users to wait until they see the green light when docking a bike. If you leave the bike undocked, then anyone can come along and take it. The meter will also keep ticking away, adding overage charges to your account (though if you call and explain your situation, Pronto customer service will likely refund at least some of the costs).

Houser said Pronto is still working through the details of low-income memberships for affordable housing residents, but those discounted memberships will be available to residents through their housing provider. Residents should hear from the agencies behind their buildings, and Pronto will also be visiting many buildings to help people know how to get the discount and how to use the system.

People living in buildings that are part of Seattle’s Residential Travel Options Program should also be able to score a discounted rate. If you think you might live in a qualifying building, ask your building manager or housing authority about it.

The city has also received a grant to help expand low-income access to Pronto, and Mayor Ed Murray has included funding in his budget to take advantage of that grant and expand the system into the International District, Yesler Terrace and the Central District in 2015. The city will also have funding for focused outreach efforts to reach low-income populations throughout the city and to potentially expand the low-income membership options.