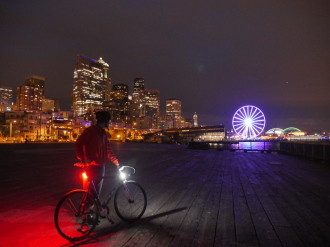 The lights are a novel take on designing bike lights in a couple ways. For one, they are completely waterproof (their video shows someone scuba diving with the light attached to the tank). They also attach using a strong magnet, avoiding the stupid plastic clip problem (though hopefully they can stay attached after nailing one of Seattle’s many wicked potholes).

But the biggest design departure is the way they diffuse light in all directions. Instead of focusing a beam forward, they glow on all sides. The idea was to make lights clearly visible from all angles.

They cost $119 each or $229 for a set through the Kickstarter. Clearly, fulfilling all the Kickstarter orders is going to take up a lot of the Orfos focus at first, but after that they’ll be looking to stock interested Seattle shops, according to Peter Clyde:

Our current focus for our business plan is obviously the Kickstarter project, and want to make sure we can deliver these lights as quickly, and efficiently as possible. When the Kickstarter funding concludes, we plan to open up our online store (www.orfos.bike) for preorders. We will ship these after the Kickstarter orders are completed.

Currently, we are collecting contact information from stores who want to sell our lights, with our primary emphasis on local Seattle area bike shops. The lights were born and bred in Seattle, and we want to honor that.

Check out the video, which includes some great Seattle biking shots:

Redmond-based Rogue Bicycles and designer David Lupafya have passed the $30,000 mark of its $50,000 goal to start producing a lightweight, belt-drive hybrid commuter bike with built-in lights and GPS.

The aluminum version is $950 and the carbon fiber version is $1,950 via the Kickstarter campaign.

Check out the video: