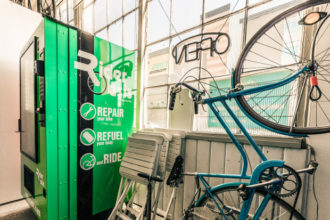 Rider Oasis has one machine in operation inside Peddler Brewing.

Seattle Bike Blog loves all our city’s local bike shops. But they all have one problem in common: They aren’t open 24/7.

And of course they aren’t. But what if you need a new tube for your morning commute? Or what if you get a flat in an area without a nearby bike shop? Or what if you’re just plain bonking in the middle of a long ride?

That’s where Rider Oasis comes in. The young company has plans to launch dozens of public-facing vending machines in the Seattle area stocked with bike-fixing necessities and pick-me-up snacks to keep people moving.

“Our goal is to have between 30 and 50 machines over the next two to five years,” said CEO and Co-Founder Aaron Mass. “We think there’s that much capacity within Seattle.”

Though Seattle is the first focus, “eventually the plan is to expand along the entire West Coast.”

The company has had one machine in operation inside Peddler Brewing for a while now, but the primary goal of the business is to have machines in locations accessible 24/7.

Bike part vending machines are not new in the world or even the U.S. Bikestock operates out of New York City and Bike Fixation has machines in Minneapolis. But the idea has not yet reached the West Coast in a big way, Mass said.

The company, which started as a UW business school project, has launched an indiegogo crowdfunding campaign to get off the ground:

The mission for Rider Oasis is simple – to make the lives of all individuals easier. We are launching this campaign to expand our service to the Burke Gilman and I-90 trails, and the South Lake Union area. Our new repair and refuel stations will include a 24/7 outdoor bike part and accessories machine, as well as a free bike pump and repair station for public use. No longer will cyclists and walkers have to worry about finding their next part or energy fix. Rider Oasis has you covered.

This entry was posted in news and tagged aaron moss, rider oasis. Bookmark the permalink.