What do you think of this Seattle company’s new e-fatbike? 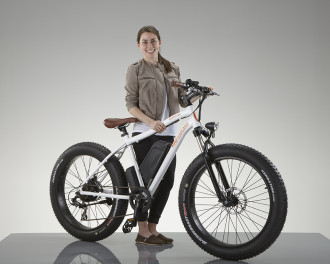 So, we don’t usually do product reviews or features here on Seattle Bike Blog. But the best way to get featured here is to be a Seattle-based company and create a video with lots of biking-in-Seattle footage :-)

I got an email from Rad Power Bikes pointing to a crowdfunding campaign for their newest e-bike, the RadRover, which has super fat tires for off-road riding. And their video has all kinds of Seattle biking scenes, including a trip past the Fremont bike counter:

But another element caught my eye, and I wanted to ask all you loyal bike blog readers about it: The company assumes you will not pedal this bike much.

In fact, the product details claim a 20-mile range without pedaling at all, and suggests pedaling simply as a way to extend your range. The bike is 60 pounds and has a top speed of 20 mph.

This is a topic that will only happen more often as electric bike and battery technology gets cheaper, more powerful and more efficient. I know it’s a debate that has happened in many other bike spaces (online and off), but we haven’t really discussed it in depth here.

I imagine some people will dismiss any bike that doesn’t expect you to pedal. After all, isn’t that really just an electric scooter?

On the other hand, I love the promise of e-bikes in allowing more people to bike for more tasks. From bike cargo companies to family cycling to people who — for a variety of reasons — feel more comfortable or more mobile with extra help climbing hills, advancing e-bike technology is a great thing for city cycling.

Plus, you can pedal it as much as you want. Why should I care how much someone else is pedaling?

Or maybe this isn’t an issue, which is why it really hasn’t come up much on this blog. Everyone just keep on keeping on. Ride whatever bike you want.

So I open it up to all you. Is this the coolest bike you’re ever seen in your life? Is there a point where an e-bike stops being a bike? Is any of this worth worrying about?

This entry was posted in news and tagged crowdfunding, rad power bikes, radrover. Bookmark the permalink.

93 Responses to What do you think of this Seattle company’s new e-fatbike?