Will we reach 1 million 2014 bike trips over the Fremont Bridge? It’s gonna be close 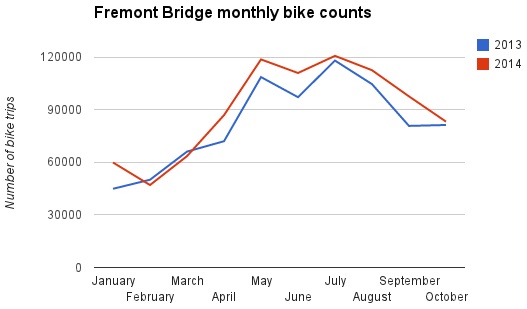 Despite work on the Fremont Bridge that has at times restricted access to sidewalks in recent months, the city is still on track to reach one million bike trips across the bridge in 2014. But it will likely come down to the wire.

The bridge recorded its busiest month on record in July with 120,669 trips, beating out the record set just two months earlier. But more notably, September 2014 blew September 2013 out of the water, clocking 97,558 trips. That’s a 21 percent gain over the previous September, mirroring the gain seen in April and a bit higher than June’s notable 14 percent gain.

In all, bike trips over the bridge are up 9.4 percent compared to 2013, and 2014 has outpaced 2013 in all but two months (February and March). Riders just need to bike across the bridge 99,301 times in November and December in order to reach one million, a symbolic but pretty impressive goal for bike trips over a single bridge. If 2014 bike rates mirror those seen in 2013, we should reach one million right around Christmas.

So don’t stop biking! Well, you weren’t gonna do that anyway, were you?

9 Responses to Will we reach 1 million 2014 bike trips over the Fremont Bridge? It’s gonna be close