Update on journey to 1 million annual Fremont bike trips: We did it! (sort of)

Graph by Doug Ollerenshaw shows running 12-month totals, which climbed above 1 million for the first time on 9/29/2014. More explanation here.

We did it! One million bike trips across the Fremont Bridge in one year!

Actually, as commenter Doug Ollerenshaw pointed out on our previous Fremont bike counter story, we did it back on September 29. That was the first day that counts for the previous 12 months totaled one million. So between 9/29/2013 and 9/29/2014, there were one million bike trips across the bridge. This same feat has been repeated many days since, as well.

However, the journey to one million bike trips in the 2014 calendar year is looking like it really will come down to the wire, maybe even to New Years Eve (how dramatic would that be?).

Unfortunately, the exact number of people to cross the bridge in November is not fully clear due to some malfunctions in the counter due to a dead battery. But assuming the count is correct, we’re gonna need 44,036 bikes to cross the bridge in December to break one million trips in a calendar year, about 500 more than crossed in the same month last year.

And with bridge painting work continuing to close the bridge sidewalks, this could be a tall order. Many people have taken to biking in the general travel lanes to avoid the work, which also means they avoid the counter. Some people may even have rerouted to avoid the bridge entirely.

Below is a look at the year-to-year comparison for monthly bike trip totals. As you can see, November bucks a nearly year-long trend of significant increases in bike traffic (note, this is the first month that we have three years to compare): 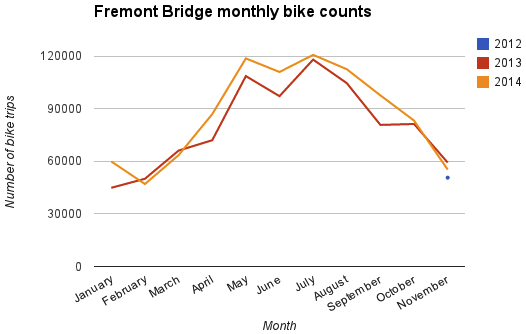 The November count should probably come with an asterisk. A dead battery caused all kinds of problems during the first half of the month. One day recorded double the bikes as any day earlier that week, then the next week recorded artificially low counts. SDOT crews checked on the counter after a number of emails from readers who thought the counts looked way off during their morning commutes. Crews discovered that a battery powering the counter on the west side of the bridge was malfunctioning (a similar problem happened on the east side earlier this year). After replacing it, counts started to make sense again: 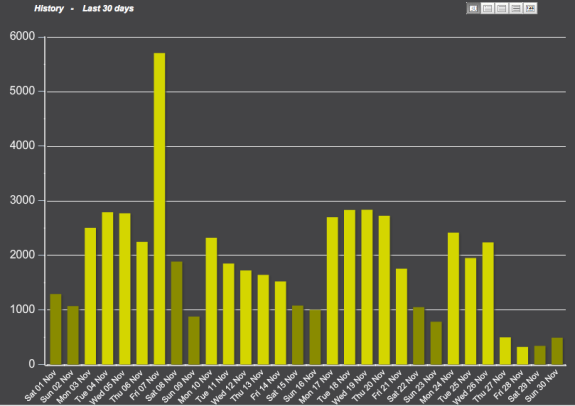 However, if you average those two suspicious weeks together (the one with high counts and the one with low counts), it comes out to about 15,000 trips each, which is on track with other recent weeks. Perhaps one of you smart statisticians out there can come up with a better estimate. If so, let us know in the comments below.

So don’t stop biking! Assuming the November count is close to accurate, we’re gonna need every bike trip we can get to break one million trips in 2014.

5 Responses to Update on journey to 1 million annual Fremont bike trips: We did it! (sort of)